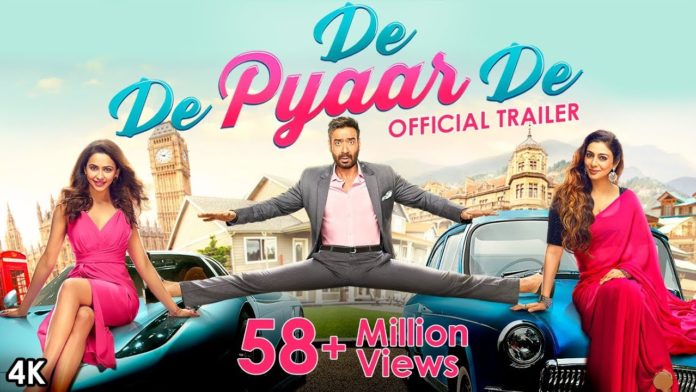 ‘De De Pyaar De’ is a light-hearted rom-com that addresses the real and plausible, issue of an older man falling in love with a girl half his age and how it is viewed upon, by the Indian society.

Ashish Mehra (Ajay Devgn), a 50-year-old London-based business man, separated from his wife Manju (Tabu) and two grown up children, who live in India, falls in love with Ayesha (Rakul Preet Singh) an engineering student who works as a bartender in London, to make ends meet.

With a view to solemnising his relationship and gaining acceptance, he takes his girlfriend to meet his parents, ex-wife and children. But, there is an element of awkwardness owing to Ayesha’s age.

The kaleidoscope of events at his home; Ayesha’s insecurities as she meets his ex-wife Manju, his daughter Ishita’s hostility fearing her impending engagement may get called off, his son getting attracted to Ayesha, and how the problems, eventually get resolved, form the crux of the film.

Moving at a steady pace, nowhere does the film drag or feel trite and boring. The plot is crisp, engaging and keeps you hooked. The situations are familial, yet dealt with an urban twist. There is no place for unnecessary melodrama here.

The treatment is contemporary and real, and the astute handling by the director, is what sets the film apart.

The story and screenplay by Luv Ranjan, the witty dialogues, laced with humour form the cornerstone of the film and the comic situations, along with ace performances, further enhance the viewing experience. .

Ajay Devgn, as the once-again-in-love Ashish, renders a mature performance, befitting his character. He is loving and responsible, yet, is lovelorn, when separated from his lady love.

Tabu, as his ex-wife Manju, is confidence personified and a lady in control. She exudes a restraint and a raw vulnerability at the same time. The camaraderie and mature understanding between the couple, is delightful to watch.

Rakul Preet Singh as the physically attractive and younger girl, Ayesha, who is madly in love with the older Ashish, brings a certain oomph to her character. She is humane, as she is cocky and yet, is convincing. She pulls off Ayesha with elan, save a few scenes where she seemingly overacts.

Jimmy Shergill, Kumud Mishra, and the actors playing Ashish’s children, lend able support in their cameos. Javed Jaffrey as his psychologist friend, is wasted and his brand of humour is uncalled for.

The music of the film is a huge let down, but the cinematography is worth a mention as both London and the scenic hill station, are captured beautifully by lens man Binod Pradhan.

Overall, with entertainment and romance, thrown in with equal measure, “De De Pyaar De” is an enjoyable film that is endearing. (IANS)