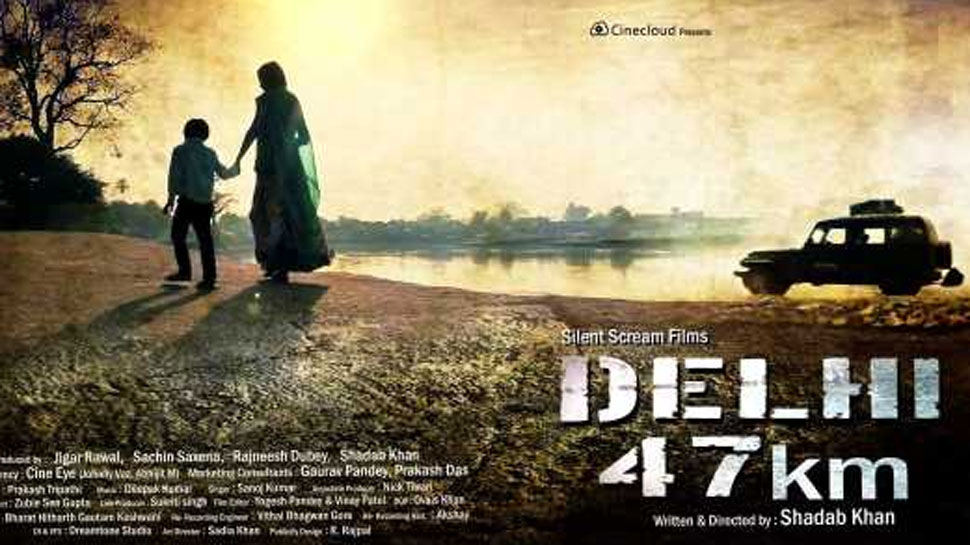 Ironically for a film set 47 km away from Delhi, it interestingly bookends in Goa.

This grimy drama, filled with noir characters, revolves around Jigar (Shadab Khan) who stays in Delhi with his ailing father. His father owns a plot of land which is a prime property in the titular location. On the plot stands a wayside restaurant (dhaba) that is usurped by Ateek Bhai (Satim Lal Bal). Jigar is desperate to have this land released from Ateek and his family.

Taking advantage of the situation is Ateek’s son Sarjil (Sarjil Khan), who is a womaniser. He uses the place for his nefarious activities. Along with him are two good for nothings, Lala (Bhadhur Singh Dangi) and Vicky (Utkarsh Dubey). They are basically parasites. They also happen to be the caretakers of the plot.

Their friend Lalan is another shady character, who indulges in guns and drug trafficking. After his death, how the three friends Jigar, Lala and Vicky exploit Lalan’s wife Avni (Dolly Tomar), forms the crux of the tale.

Initially the plot seems rough and unpolished, introducing the various characters and their behavioural patterns. But once that settles, the earnest and realist tones crank up the style. So it’s clear that the film is driving home a point – that crime does exist so close to the capital.

Despite the film being clearly dark with bits of melodramatic violence, the director astutely balances some goodness with a redemptive approach. The film had the potential of displaying raw nerves, but that’s cautiously handled. There are moments that touch your heart especially when Avni states how people she trusted betrayed her. Or when she gets battered at the end.

While the entire cast are natural and earnest in their performances, your heart goes out to Mustakeem Khan, the child actor who plays Lalan and Avni’s son, Mintu, simply because he is the only child in this dark, horrific tale. There are a few stray incidents where the action appears mildly theatrical and the fault here lies with the direction. While the screenplay is seamless, the writing especially the dialogues lacks the finesse.

The film shows that it is mounted with moderate production values. The production designs are appropriate and realistic. Except for a few dark frames, the locale is beautifully exploited by Ovais Khan’s lens. Yogesh Pandey and Vinay Patel’s editing is a bit sluggish.

The songs with sombre lyrics are melodiously rendered by Deepak Kumar and Warsi Brothers. Its picturisation flawlessly encapsulates the moments effectively, thereby giving a fresh lease of life to the otherwise dark narrative.

Overall, the film is well-executed, and portrayed in its own expansive landscape. (IANS)