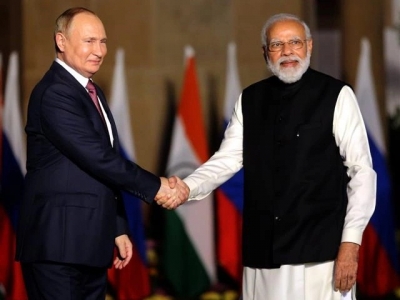 New Delhi– The ‘special and privileged strategic partnership’ between India and Russia, as referred to by Prime Minister Narendra Modi at the Eastern Economic Forum, opens up new areas of mutually beneficial cooperation between the two countries.

In the field of trade relations, for example, there has been a significant increase in cooperation. According to India’s Ministry of Commerce and Industry, trade turnover between Russia and India reached $13.7 billion during the first six months of 2022, up 2.7 times over the same period in 2021.

Russian Ambassador to India, Denis Alipov, provided similar data at the recent SCO Summit in Uzbekistan. According to him, trade turnover between Russia and India saw ‘unprecedented growth’ in the first half of 2022 and reached over $11 billion, which is promising in terms of reaching the goal of $30 billion in mutual trade by 2025.

As of April 2022, Russia was India’s fourth largest supplier of oil. In addition, according to the Indian Minister of Metallurgy, the country also plans to increase its purchases of coal from Russia. In May 2022, India abolished import Customs duties on this product.

At the same time, a number of imports from Russia continue to be restricted by the existence of a 7.5 per cent duty (+0.75 per cent additional charges). Some experts claim that this situation is constraining the development of the Indian economy. Late last year, India and the EAEU, along with Armenia, Belarus, Kazakhstan, Kyrgyzstan and Russia as member states, carried out expert consultations on establishing a free trade area (FTA) and agreed to start the corresponding negotiations early this year. Unfortunately, the Russia-Ukraine conflict caused certain delays in this process. For all parties involved, it is now important that these negotiations do not come to a complete standstill.

Another important focus to further intensify the cooperation between India and Russia should be on ensuring that all transport corridors operate to a high level of quality. We are now seeing signs of activation in the North-South corridor, which had long been forgotten. From India, goods go to the Iranian port of Chabahar, then through the Iranian railways to the North, from there to Astrakhan from the North Iranian ports and from there to Central Russia.

There are many areas that need to be strengthened in order to preserve and accelerate India-Russia relations and prevent them from stagnating in a rapidly-changing world. Though a number of initiatives have been proposed between Indian-Russian institutions, they are on the slow track, and are in need of acceleration. These include the International North-South Transport Corridor, free trade agreements, labour visas, better mechanisms for rupee-rouble trade and links with banks. This acceleration process requires political will and creativity, and would offer huge advantages to both India and Russia.

In 2022, Russia and India celebrate 75 years of diplomatic relations. After many years of building partnership and collaboration, the interaction between these two countries needs to be strengthened and accelerated in order to sustain a multipolar world. (IANS)