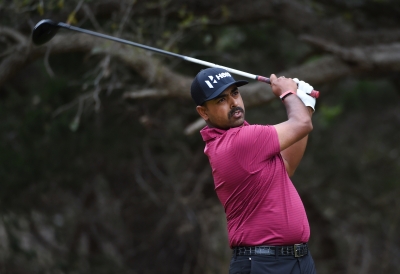 Hilton Head, (South Carolina)– Golfer Anirban Lahiri will be high on confidence when he tees off at the RBC Heritage this week after a top-five finish at the Valero Texas Open in San Antonio recently.

The Indian will not have to look far for inspiration as one of his best friends on the PGA Tour, Hideki Matsuyama, won the historic Masters last weekend. Besides, Lahiri, who is used to having his coach Vijay Divecha with him in the US for every 2-3 months, is finally re-united with the trainer, who arrived a week back.

After missing five cuts in seven starts this year, Lahiri finally broke the string of poor performances at the Texas Open and attributed it to working on his full swing and ball striking in the last one month.

“We’ll get to work on the other departments and just try and build. It will be nice to actually have him (Divecha) take over and have me think less and do more. It’s been tough the last three or four weeks just grinding, grinding, and grinding and working hard. So, it felt nice to be rewarded by a nice week (in Texas). And now, Vijay (Divecha) can add to that. Having him is a big change. It is a big difference,” said Lahiri, who is a serious contender for a spot in the Tokyo Olympics contingent if he further improves his world ranking.

The confidence of a top-5 finish in Texas was timely and seeing his good friend, Matsuyama win one of the biggest prizes in the game, has been a big boost.

“Hideki is a good friend since we played on the Presidents Cup team. Seeing him play the highest level and win the Masters was a big boost.

Soon after Matsuyama’s magnificent win, Lahiri tweeted, “What a win! Hideki you did it! Time for all of us to step. So happy and proud of you, my friend!”

“Lahiri would not have reached where he is if he was not good, but you should not try to do too much or too many things. That’s what we are addressing. Simplifying things,” said Divecha.(IANS)