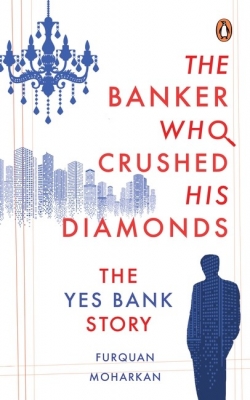 New Delhi– “The Banker Who Crushed His Diamonds” that charts the trajectory of the YES Bank from its inception to its dramatic rise and meteoric downfall, capturing the story of the people behind one of the biggest banking failures in Indian history, is to be adapted for the screen, its publisher, Penguin, has announced after closing a deal with Almighty Motion Picture for its AV rights.

Vaishnavi Singh, Manager, Digital Platforms, Products & Video Rights, Penguin Random House India, said: “After the resounding success of the book, we are excited to see the story of one of the biggest banking scams transform for screen. We have seen a growing appetite for financial crime drama and ‘The Banker Who Crushed His Diamonds’ not only fits the bill as a cautionary tale, but it is also a revelation of the chinks in India’s armour against financial chaos.”

“I am really excited that Almighty Motion Picture has acquired the rights for my book,” the author, Furquan Moharkan, said.

“A scam of this magnitude has to be taken to masses, and what better than a book getting made into an AV form. We have also seen growing interest in financial thrillers in the country, which I hope would lead to success of ‘The Banker Who Crushed His Diamonds’ in AV form. This will also help a lot in making the masses financially more literate,” he added.

On September 28, 2018, after announcing that he was going to step down as the Managing Director of YES Bank, Rana Kapoor had claimed: “Diamonds are forever. My promoter shares of YES Bank are invaluable to me.”

However, in a span of just 14 months, Kapoor did a complete U-turn. He sold his entire stake in the bank, even as the shares continued to get hammered by investors.

Rana Kapoor and Ashok Kapur had founded YES Bank in 2004.

On March 5, 2020, the Reserve Bank of India (RBI) took control of it in an attempt to avoid the collapse of the bank, which had an excessive amount of bad loans.

“The Banker Who Crushed His Diamonds” takes you right to the start of Rana Kapoor’s career as a banker, charting his meteoric rise, his mercurial personality, the lavish lifestyle and the unravelling of it all.

Kapoor’s story runs parallel with that of the fourth largest private bank in India.

In what feels like a story straight from a financial thriller, the book uncovers the rot deep within YES Bank’s glittering success story. It serves as much as a cautionary tale as it exposes the chink in India’s armour against financial chaos. (IANS)