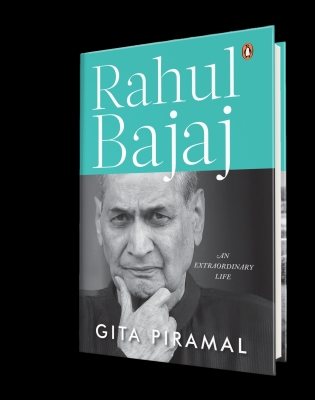 New Delhi–Despite the innumerable hurdles that he faced in a career spanning over five decades as the head of the diversified Bajaj Group, veteran industrialist Rahul Bajaj, the original Make in India proponent, lived by the dictum that “integrity and character matter. Without them, no amount of ability can get you anywhere. In addition, you need courage — courage to make difficult decisions and courage to oppose something if your conscience tells you that you are right.”

Business ethics were, thus, foremost for Rahul Bajaj, the grandson of Jamanlal Bajaj, a close associate of Mahatma Gandhi and who founded the Bajaj Group in 1926. He took over as group head in 1965.

“Ensuring that the consumer obtains the best possible product at the lowest possible price, and the employee gets a fair wage for a day’s work, is the criterion of ethics in business,” he would often declare, corporate historian Gita Piramal writes in ‘Rahul Bajaj – An Extraordinary Life’ (Penguin), the first authorised biography that chronicles the transformation of India through the life story of one of India’s most successful and visionary business legends who passed away on February 12 after a prolonged illness aged 83.

Bajaj cut his teeth at a time when Indian industry was passing through one of its roughest phases – the licence-permit-raj era – during which the politicians and the bureaucracy dictated every step you took, from setting up a factory to deciding its output and in some cases, even the price. For instance, the waiting list for Bajaj scooters, of which the company eventually became not only one of the most valuable two-wheeler manufacturers in the world, but also the world’s largest two-wheeler maker and the largest three-wheeler maker.

The restrictions began somewhat easing in 1985 but were done away with only in the era of liberation that began in 1991 when Manmohan Singh (later the Prime Minister) presented his first budget as Finance Minister.

“We faced competition head-on and I concentrated on three things: I must have volume, the lowest cost and the best quality. It is very simple. There is nothing intelligent in that. You don’t need to go to Harvard to learn that. If you don’t have these three things, you are in trouble. Others failed to do so, and they could not compete with us on quality or price. Best quality would include the latest cutting-edge technology. And that is what I constantly did. I needed scale for both, so I kept going to Delhi to get approvals for expansions,” the book quotes Bajaj as saying.

“First, the lens of leadership.” Bajaj exemplified leadership “as it is taught in business school, yet is often so elusive in the corporate world itself”. He was a “visionary and clear on strategy”, was “decisive, action-oriented and execution-driven, and excellent with people and in building teams”. What made him distinctive were “his convictions, and his ability to speak out and to defend his beliefs” – ultimately, “the true hallmark of leadership”.

“Second, his journey captures the intricate and inseparable relationship between business, government and society. He symbolises the evolution of this relationship in India. Given that we live in a world where environmental, social and governance concerns are increasingly important to investors and other stakeholders, I hope these lessons will resonate with readers from a diverse range of backgrounds.

“Finally, the prism of sustainability and the value of leaving a lasting legacy. Many young entrepreneurs today are motivated by billion-dollar valuations and relatively quick exits. This is certainly a tempting path. Yet Rahul’s journey is testimony to a life of perseverance and purpose, towards value creation with a horizon that spans multiple generations,” Piramal writes.

Based on unrestricted interviews, remarkable anecdotes and business learnings, this book is a comprehensive account of the life and times of the business icon. From his mother’s incarceration during India’s struggle for freedom to his own personal life, his journey in becoming one of the most well-regarded business personalities in the world, this book opens a window to Bajaj’s eventful life.

It’s a book which is peppered with incomparable lessons about family, business and public life, and about ultimately leaving an indelible mark on the fabric of society.

For instance, Bajaj was very clear about his “no bribe” rule – no matter what the consequences.

“I learnt how difficult it can get to chase someone in Delhi for a licence, then some fool delays the whole project by procrastinating because he wants something for himself, but thank goodness I was never actually penalised. Even if money could have bought a licence, I can categorically say we did not give any ministers or any bureaucrat a single rupee to get a licence,” Piramal quotes Bajaj as saying.

Then, there is Manohar Joshi’s comment after Suzuki Motors’ Osamu Suzuki had outbid Bajaj for the government’s 50 per cent stake in Maruti Udyog Ltd. during the disinvestment process.

“One incident is still fresh in my mind. As Minister of Heavy Industry (in 1992), we were instructed in disinvestment of Maruti Udyog Ltd. You approached me to buy the shares. You made it clear to me that you would like to purchase the shares, but the entire deal should be transparent, and you will not bribe anybody, anytime, In my long political career, you were the only industrialist, who was so honest and outspoken. Rahul ji, I am proud of you,” the book quotes Joshi as saying.

Bajaj was also very clear about the probity issue on two aspects of banking being opened to the private sector in 1993.

“The RBI must ensure new banking licences aren’t given to corporates or large houses whose track records don’t suggest probity in public life and ethical behaviour,” Piramal quotes him as saying.

“The second call was to erect Chinese walls within a conglomerate in order to avoid lending funds between group companies and its bank,” Piramal writes.

Bajaj was also candid about the Bombay Club, initially of 16 top industrialists, then down to six and finally him alone.

“The whole idea got completely ultafied (upended),” Piramal quotes Bajaj as telling Indian American economist Srikant Datar, now the Dean of the Harvard Business School, in an interview in 2008.

“I was shouting away in the 1980s for liberalisation but then in 1993, I became infamous. When I asked for a level playing field, everybody thought this was a euphemism for protection. All that we were saying was that the government should enable us to face foreign competition. Nobody listened to me, not from the media or anybody else,” he maintained.

Bajaj was also happy that the line of succession, effective 2008, he drew up after stepping down as Managing Director of the Bajaj Group in 2005 has kept the male descendants of the two branches of the family – his and that of his late uncle, Ramakrishna Bajaj – united.

He decided that elder son Rajiv “should continue to run the auto manufacturing business as Managing Director and Chief Executive Officer. (Younger son) Sanjiv would hand over the international market to Rajiv-Sanjiv would oversee the finance business and the new strategic businesses”.

“Both sons would sit on all boards, and Sanjiv would continue as executive director of Bajaj Auto. Rajiv would join Sanjiv’s boards as each was created. Bajaj Auto’s board structure should remain unchanged and (Rahul) Bajaj would serve as chairman of the two new boards. A couple of cousins from the Ramakrishna’s side of the family would be good,” Piramal writes.

After his schooling from Mumbai’s Cathedral and John Connon School, Bajaj graduated in Economics from Delhi’s St. Stephen’s College, obtained a Law degree from Mumbai’s Government Law College and rounded it off with an MBA from Harvard.

Honoured with the Padma Bhushan, India’s third highest civilian award, he was also a member of the Rajya Sabha and twice President of the CII.