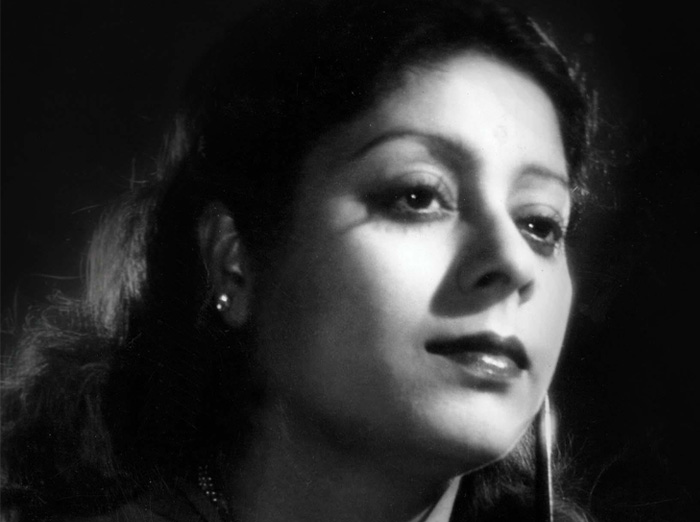 Her life seems like a melodramatic film plot – a hard-fought ascent from destitution and menial work to become a superstar and a heart-throb, but then also encountering the dark side of the glamour world with its lechery and jealousy and the harsh lesson that fame does not always make for happiness. But then Kanan Devi was scarcely an ordinary person – or performer, and succeeded in scripting her own story.

Beginning as a child artiste, she was among those who not only made the transition from silent movies to “talkies” but saw their careers further augmented. Kanan Devi “rose to become one of the biggest screen divas of her time”, commanding Rs. 1 lakh for a song and Rs. 5 lakh for a film.

She was one of a select group – singing superstars – which only comprised besides her, K.L. Saigal, Noor Jehan and Suraiyya – and time has not been very kind to them. Only two of them flourished in independent India (Saigal dying in early 1947 and Noor Jehan moving to Pakistan after Partition) but all are obscure figures for the present generations, if at all known, and their accomplishments only cherished by a few devoted admirers.

But there is always somebody to bring them back into the spotlight, and Kanan Devi (c. 1916-1992) could not have been better served then by this former banker, fond of classical music.

For Mekhala Sengupta, her introduction to Kanan Devi’s “haunting music” came as a management trainee in 1980s Bombay. Hearing Kanan Devi’s “pristine” and “intoxicating” voice was an “enrapturing experience” and when Sengupta came back home from a long foreign work stint, she renewed her acquaintance – but with a difference.

A meeting with music connoisseur Pran Neville, who has penned a definitive biography of Saigal, made her realise that when she was well aware of Kanan Devi’s songs but knew almost nothing of her “rags-to-riches” life.

“So began a reading of the life of Kanan Devi and the times she lived in, which eventually became this book,” says the author and her debut work presents a compelling picture not only of the actress, who had wowed not only India but also Hollywood, but also of the “golden” period of Indian cinema (including its ugly underside) – and the social mores and attitudes towards cinema and its stars in a period of huge political and social change.

Kanan Devi did write her own story “Sabaray Ami Nomi (I am Beholden to All, 1973)”, but this – like many autobiographies – has many gaps and glosses. Sengupta makes use of it, but supplements it with other published material, radio archives, personal anecdotes of those who had interacted with her – and some inspired deductions – to present a rounded and nuanced picture of the star, from a child with an uncertain future to a well-honoured grandmother, and the changing industry.

Aptly contrasting her subject to Sophia Loren (whose own autobiography came out recently) insofar that both with grit and talent overcame a childhood of deprivation and hunger to become accomplished stars, the author also makes a compelling case that Kanan Devi was the first Indian superstar, not Devika Rani.

We also come to know how Kanan Devi helped to popularise lyrics of Rabindranath Tagore and Kazi Nazrul Islam – and even how the Gurudev was not safe from self-appointed guardians of social convention, how a cruelly manipulative studio nixed her chance to take up a role in P.C. Barua’s “Devdas”, how she befriended Vivien Leigh, what happened in her meeting with Mahatma Gandhi, and what advice she gave Suchitra Sen.

Sengupta provides insightful sketches of many legends – Saigal, Prithviraj Kapoor, Pahari Sanyal, Ashok Kumar, Uttam Kumar, music directors R.C. Boral, Pankaj Mullick and K.C.Dey, producer B.N. Sircar among others, incisive accounts of some most famous films and songs but also ‘familiar’ tales of established stars trying to be “friendly” towards heroines, jealousy and back-biting, discrimination against women artistes, hounding of stars even into their personal life and the like.

Some things never change in the film world!