WESTON, MA— LearnQuest Academy of Music announced its artists lineup for its 11th annual Music Conference and Festival . Classical musician and Sarod legend Ustad Amjad Ali Khan will be the main featured artist during the festival that will be held from March 25 through March 27, 2016, at Regis College in Weston, MA. 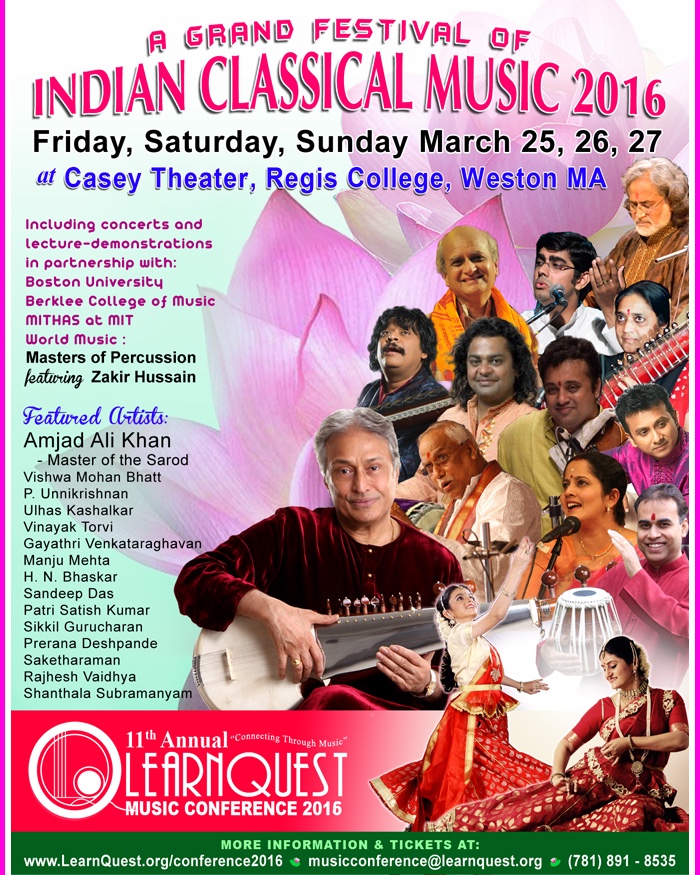 The key artist lineup include:

LearnQuest is also collaborating with Boston-based World Music to present Ustad Zakir Hussain and Masters of Percussions on March 27. Tickets are sold separately for Zakir Hussain event with discount to LearnQuest conference attendees.

Shashank Nene, Chair of the Music Conference and Festival, said that the LearnQuest’s motto is “Connecting through Music”.

“It is probably the only music festival in the world that brings together musicians from not only the North and South of India but also from the West – all together in one grand event. Each year we put together an event that showcases some of the finest talent,” Nene told INDIA New England News. “This year’s set of artists include people who have won high praise, recognition and multiple awards, not only in India but also in the West. We have Padma Vibhushans and also Grammy Award Winners. It is difficult to find such a large collection of extraordinary musicians together in a single festival. We all know and love great musicians like A.R. Rehman and Shankar Mahadevan – now here is the outstanding cultural heritage and tradition that gave birth to such greatness.”

This year, on the instrumental side, LearnQuest has assembled the Sarod Master – Ustad Amjad Ali Khan, Grammy Award winner – Pt. Vishwa Mohan Bhatt on the Guitar, Pt. Ravi Shankar’s disciple – Manju Mehta on the sitar, Rajhesh Vaidhya on the Veena and Shantala (Carnatic) and Jay Gandhi (Hindustani) Flute – each artist has won multiple awards in many countries.

“On the vocal side we have Unnikrishnan, Sikkil Gurucharan, Saketharaman and Gayathri Venkataraghavan for Carnatic and Pt. Ulhas Kashalkar and Pt. Vinayak Torvi for Hindustani – again all are recipients of multiple awards in many countries. We also have Prerana Deshpande – a Kathak artiste of international fame,” Nene said. “For us Indian-Americans living in this area, this is an opportunity, not only to experience and enjoy the music of these masters but also to introduce this slice of culture to our children. Outside of the performances themselves, there will also be opportunities to get close to the artists and learn about the instruments and music. Overall, it is a highly enjoyable place to be with good music, good food and good company.”

“He has tremendous control over his instrument as well as mastery over his mastery as well as ‘ragadari’ (raga development). Even when he plays a simple tune like Raghupati Raghav Rajaram, it become quite apparent that a great master is playing,” Shukla said.