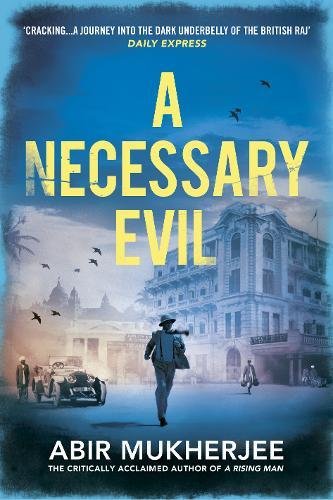 If a crime fiction series is set in the Raj era, one installment will invariably be in a Princely state, where there is usually an uneasy pact between tradition and modernity, succession battles and other palace intrigues (especially within/from the zenana), some dodgy gold-digging foreigners, a tiger hunt — and British India’s laws don’t apply.

It happened to Barbara Cleverly’s Joe Sandilands in the last of his India quartet of adventures (“The Palace Tiger”), and it is down the same road that Abir Mukherjee sends his Captain Sam Wyndham, of the Calcutta police, in his second appearance.

But where Mukherjee scores better, is that unlike Cleverly, whose Ranipur was an incongruous mishmash of a Rajput and hill principality, his native state is in a fictionally neglected part of India and Sambalpore (a real but but long-defunct state) in Orissa has a range of serious contemporary issues.

Wyndham’s native sergeant “Surrender-Not” (the anglicised pronounceable version of Surendranath) Banerjee is summoned to a meeting of eastern India’s potentates with the Viceroy in Calcutta as Sambalpore’s Crown Prince, whom he knew at Harrow, wants to discuss something urgently with him. As Sambalpore is of vital importance to the Imperial government, Wyndham’s boss orders him to attend too.

The Prince, however, suggests that the discussion could be better held at his hotel, but as he, Wyndham, Banerjee with his Sikh ADC-cum-bodyguard set out, the ongoing “Rath Yatra” forces them to take an alternative route through the Maidan. There, a man in the garb of a religious mendicant stops them, and shoots the prince dead.

While Wyndham and Banerjee manage to run the suspected assassin to ground in the city, he prefers to shoot himself rather than be arrested and interrogated. However, some clues they find — as well as the issue Banerjee was summoned about — convinces them that the roots of crime lie in Sambalpore.

It is out of British jurisdiction, but they manage to get sent there somehow and once there, Wyndham convinces the Maharaja to allow them to get to the root of his son’s killing and soon uncovers a tangled web.

There are plots galore to ensure a favourable succession, a possible scam in the state’s lucrative diamond mines which a British businessman is looking to acquire, and Indian nationalism’s suspected ingress into the state, as exemplified by the activities of progressive school-teacher — now arrested and incarcerated on suspicion of involvement in the assassination.

And given the assassin’s garb, is there a religious angle too?

Wyndham has to contend with serious political considerations, India’s legendary secretiveness, and turf battles of the Raj’s own bureaucracy to try to get to the truth but is eventually ordered home before he has solved the matter. A chance comment from a scholar he meets on his way back opens his eyes and he has to hurry back to avert another tragedy.

But will he be in time, and can he forestall the game of a much-experienced and effective plotter? We only find on the very last page till where the compelling and convulsive cliff-hangers continue.

Mukherjee, whose debut last year dealt with the seamier side of British India’s politics, law enforcement and class and race issues in 1919 Calcutta, eschews the Raj’s second capital for the exotic setting of Princely India, with its own sets of rules and dynamics, but most of these issues creep in some way or the other while the mystery is first-rate.

Then the supporting cast, including the feisty woman school-teacher, the Gujarati diwan, the upright Sikh ADC, the conscientious British accountant, the Resident’s outspoken wife, the Maharanis and more make the narrative engaging.

What also appealing are the views — mostly unflattering — of Wyndham about his countrymen, right down from the Viceroy himself, as well as some entitled Indians and the depiction of an India which is not even a century old, but appears an entirely different world in many aspects.

But Mukherjee, who reveals that his story was inspired by the Begums of Bhopal, also subtly works in some incisive views about India and the things which have remained constant despite the change in rulers. As such, there is something in this book for all buffs — mystery, social history and political. (IANS)