Rakulpreet: Laughter is my everyday therapy

Rakul posted a picture on Instagram from her Madivian getaway. She is seen in over-water hammock.

“Laughter is my everyday therapy!!” she wrote alongside the image.

Rakul is all set to star alongside Amitabh Bachchan and Ajay Devgn in the thriller drama “MayDay”. The film is directed and produced by Ajay Devgn. The actress will be seen in the role of a pilot. This is her second film with Ajay after “De De Pyaar De”.

The actress will also be seen in “Doctor G” and a cross-border love story featuring Arjun Kapoor, John Abraham and Aditi Rao Hydari.

Aamir Khan to shoot in Kargil for ‘Laal Singh Chaddha’?

Mumbai– Bollywood superstar Aamir Khan will shoot for the final schedule of his upcoming film Laal Singh Chaddha in Kargil, a source close to the project said on Friday.

“The team is waiting for the snow to melt so that the team can go ahead and shoot the Kargil war sequence in May and June. This sequence is of great importance to the film’s plot,” said the source.

The film is an official remake of the 1994 Hollywood hit Forrest Gump, starring Tom Hanks. Besides essaying the title role, Aamir has produced the film, which also features Kareena Kapoor Khan.

“Aamir, who is known to be a perfectionist has made ‘Laal Singh Chaddha’ his passion. He is even looking into the edit and back-end work of the film. He’s completely focused on the film and has decided to switch off his mobile phone until the film hits the theatres, enabling him to concentrate on the film hundred percent,” the source added.

Laal Singh Chaddha directed by Advait Chandan is scheduled to release around Christmas this year.

Akshay-Sara-Dhanush starrer ‘Atrangi Re’ in theatres on August 6 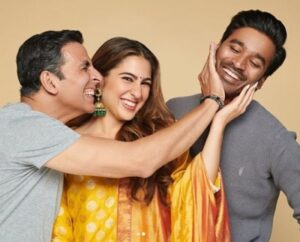 This is the first time Akshay, Sara and Nimrat are working with Rai, while the filmmaker has worked with Dhanush earlier in the 2013 film Raanjhanaa.

Atrangi Re went on floors in March 2020, in Varanasi. The team resumed shoot in October post lockdown in Madurai, followed by schedules in Delhi and Agra. Shooting started with Dhanush and Sara, while Akshay kumar joined the unit in Agra.

The film is written by Himanshu Sharma and the music is by Academy Award-winning composer AR Rahman. The lyrics are penned by Irshad Kamil.

Vijayendra Kumeria: My heart goes out to those who don’t have supportive partners

The late Nahar had, in his suicide note, stated his wife was mentally harassing him. Vijayendra feels it is very important to have supportive partners.

“It is sad and my heart goes for people when they don’t have supportive partners. A support system is something that can help you a lot but if it is the opposite then of course wrong decisions ought to happen,” Vijendra tells IANS.

“Insecurity is one of the main reasons for people getting worked up. It’s not just people from the entertainment industry who experience insecurity,” he adds.

“The majority of people ignore mental health and concentrate on the physical aspect of health,” said the actor, who often openly discusses mental health.

“Peaceful mind reflects on your body and your personality. Meditation is the best thing to do. It really helps to calm you down and handle your anxiety issues. Personally, I meditate, do breathing exercises and most importantly do things that I love to do, for example read or paint,” said the actor, who will soon be seen in Aapki Nazron Ne Samjha.

Mumbai– Anupam Kher will soon be seen in the short film Happy Birthday, which the actor describes as a mystery drama. Shoot of the film is scheduled to start on Monday.

The Prasad Kadam directorial unites Kher with Aahana Kumra. The actors had earlier worked together in the 2019 release, The Accidental Prime Minister.

Director Prasad added: “The title of the film may make you think it is a happy-go-lucky movie but that’s the irony. The film revolves around what we call a dark thriller. Both Anupam sir and Aahana are playing interesting characters. It’s a pleasure to work with Anupam Kher since he is a spontaneous and cooperative actor. It’s always very organic when you are with him. Aahana Kumra is unapologetic and experimental.”

“The graph of the characters definitely take the audience by surprise. It’s a very interestingly story that will make you rethink about your concepts of life and death. We started the shoot on February 22 in Mumbai. Once the shoot and post-production work is over, we will announce the release date,” Prasad added.

Ekta Kapoor: In most countries, sexuality of a woman is considered sin

Mumbai– Bollywood Czarina Ekta Kapoor, who has successfully tapped the domains of film, TV and OTT, says in most countries, sexuality of a woman is considered a sin.

It is a conscious decision on her part to push strong women-centric stories such as Lipstick Under My Burkha, The Dirty Picture and Dolly Kitty Aur Woh Chamakte Sitaare, she adds.

“It is a conscious decision. In most of the countries, the sexuality of a woman is considered as sin. That’s a big problem and I was told many times that I was a big part of that journey — by showcasing women wearing sarees and sindoor (on her TV shows). I have somehow stunted the growth of women in this country. I don’t agree to this because I felt that a woman in a saree is a choice, as a woman in a swimsuit,” says Ekta.

She adds that she has narrated several stories of “conservative women” with “household issues”, and now it is time to tell stories of women who have “other issues”.