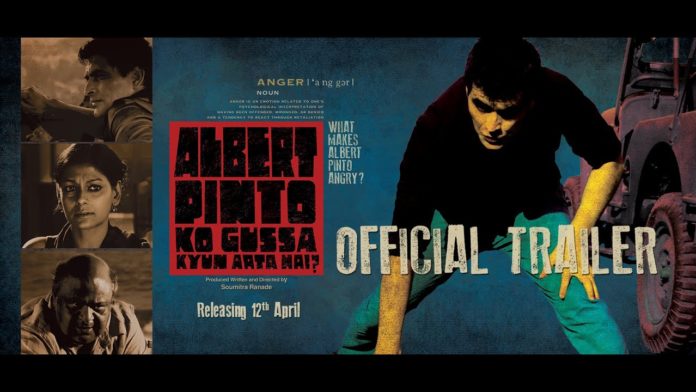 Apart from the seething fury directed at a social structure that victimizes and crushes the underdog and a raging anger at capitalism, this new Albert Pinto played by Manav Kaul, and the earlier iconic Pinto played by Naseeruddin Shah, have nothing in common.

Saeed Mirza’s 1980 classic gets a nodding homage in this completely refurbished take on societal prejudices and an individual’s resentment against a system of governance and economy which encourage monstrous disparity. While Mirza’s film swathed Naseeruddin’s implosive rage in reams of anchored anger and sublimated satire, Manav’s anger and bitterness is uneven and spasmodic.

It strews itself all over the place, literally, as this Pinto takes off on a road trip to Goa with a creepy gay paedophile.

Pinto’s rancour is sometimes directed at the wrong people, like this convivial tribal (played by Omkar Das Manikpuri) whom Pinto burns with his cigarette for smiling all the time. Pinto comes across as a spoilsport, a party-pooper who won’t let others enjoy life, because he can’t. Won’t.

The Kaul-Shukla interactive journey is engaging to a point. But it soon plunges into an embarrassing low-blow of shared acrimony that isn’t getting us, or the two main characters, anywhere.

Albert Pinto’s relations with his suicide-driven father formed a base of splenetic cop-out in both the versions. Here, Albert Pinto relives his father’s death in scenes that creep up on him in unexpected places… outside a restroom, in the middle of a forest, and so on. We are never sure of when Pinto’s outward-projected anger pulls into an inward-drawn self-destructive force.

Manav is a very fine actor when playing unpredictable, volatile, rudderless characters. Writer-director Soumitra Ranade burdens his character with an existential baggage that the narrative is not quite equipped to carry. Given the absence of a lucid motivation, Manav struggles to imbue his character with a sense of subverted purpose.

Added to the narrow, anarchic universe created by a writer-director who fathoms the dynamics of all-consuming rage but doesn’t quite have a grip over its movement in his narration, is the part of Pinto’s pert girlfriend Stella, played with impassioned exasperation by Nandita Das.

Stella, in the original, was played by the formidable Shabana Azmi. She had little to do except recoil and uncoil in sync with Pinto’s anger. In the new avatar, Stella is made to be omnipresent. Even when Pinto disappears on her, he sees her everywhere: on posters in an alcohol shop, a giggly prostitute whom Pinto solicits at a dhaba en route to Goa with his sleazy child-abusing companion (are we supposed to find Shukla’s character endearing in his depravity?), in a forest where a benevolent tribal introduces him to his pretty wife (who could be Smita Patil in “Aakrosh” if only she was placed in a less disoriented situation).

Nandita plays multiple roles quite effectively, though at times I did get the feeling that she isn’t fully convinced of her weird omnipresence in the plot.

All through its running time of 90 minutes, “Albert Pinto…” see-saws between psychedelic surrealism and a bizarre symbolism. Early in the film, Pinto swallows a piece of glass with his beer. It remains stuck in his throat, quite like the film which celebrates the hiccups of explorative existence to an extent where the obstacles and dilemmas seem like the reason for the film’s existence.

There is a sequence early in the film where Stella informs Pinto that she is pregnant. He reacts with joy, sarcasm, confusion and resignation, all in a disconcerting loop. The scene ends with Stella declaring that she was only testing Pinto’s loyalty.

The sequence is remarkable for converting compartmentalized emotions into a frenzied mass of overlapping emotions. Here, more than anywhere else, the director tells us we are entering a universe where the characters’ emotional responses are not to be relied upon. Given the absence of an authentic centre, “Albert Pinto…” dithers dangerously and quite seductively, on the brink. It doesn’t topple over. But the abyss is a breath away. (IANS)