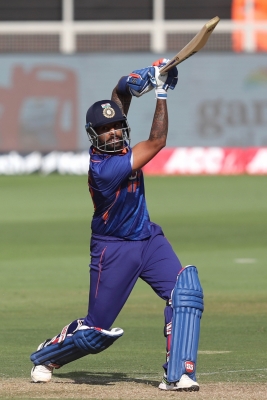 Ahmedabad– Riding on some fine bowling performances, West Indies restricted India to 237-9 despite a gritty fifty by Suryakumar Yadav (64 off 83) in the second ODI of the three-match series at the Narendra Modi Stadium, here on Wednesday.

Put into bat first, India in a surprise move sent Rishabh Pant to open the innings along with skipper Rohit Sharma. It was the first time Pant was opening the batting in ODIs.

However, the opening stand didn’t last long as Kemar Roach dismissed Rohit on 5 in the 3rd over. It was a short delivery and Rohit looked to run it past first slip but extra bounce did the trick, taking the outside edge and Shai Hope making no mistake behind the stumps.

Virat Kohli then joined opener Pant at the crease and both batter hit few boundaries, taking India to 37/1 after 10 overs. But Odean Smith jolted the hosts by removing both the batters — Kohli (18) and Pant (18) in the same over.

Pant tried to pull a short ball from Odean but he spooned it high in the air to Jason Holder at fine leg while Kohli was drawn into playing the drive and got a thick edge and ball went straight into the gloves of Hope.

At 43-3 after 11.6 overs, India were in a spot of bother but KL Rahul and Suryakumar Yadav rescued India from the trouble. During the process, Rahul also got a reprieve by visitors. Kemar Roach, who was brought back into the attack, replacing Odean Smith, induced an edge from Rahul but Shai Hope dropped a sitter behind the wicket.

West Indies introduced spin for the first time in the 21st over but it didn’t trouble the Indian batters that much as duo of Rahul and Suryakumar they rotated strikes well and hit boundaries at regular intervals too, helping hosts go past 100 in the 26th over.

After spending enough time in the middle to assess the conditions, Rahul shifted gears and hit a few glorious shots, inching closer towards his fifty but a misunderstanding in running between the wicket resulted in him falling short of his crease on 49. Rahul called for two but he hesitated for the second run midway, which brought about his downfall and the 91-run stand for the fourth wicket was broken.

However, Suryakumar continued his well-paced knock to score his second ODI half-century, becoming the first player to cross 30 in each of his first six ODI innings. Washington Sundar also complimented him well from the other end by giving his regular strikes.

After scoring his fifty, Suryakumar (64) needed to carry on and bat through to take India to a respectable total but Fabian Allen gave West Indies the big breakthrough by dismissing the batter in the 39th over. Allen tossed the ball up and Yadav tried to play sweep but got the top edge and Alzarri Joseph took an easy catch at short fine leg.

Soon, India lost another wicket of Washington Sundar (24), who came down the track and looked to go over long-on but picked out the tall Alzarri Joseph at the edge of the boundary, leaving India to 192-6 at 41.6 overs. From there on, it was Deepak Hooda’s responsibility to finish well for India. He hit a much-needed boundary for India in the 45th over, to help India go past the 200 run mark.

But, Alzarri Joseph picked two quick wickets of Shardul Thakur (8) and Mohammed Siraj (3) to leave IND 8 down. Deepak Hooda, the last remaining hope of India, tried to up the ante but was caught by Akeal Hosein at the deep cover region in the over bowled by Jason Holder.

In the end Yuzvendra Chahal (11) and Prasidh Krishna (0) remained not out as West Indies restricted India to 237-9 after 50 overs. Odean Smith (2/29), Alzarri Joseph (2/36) were the main wicket-takers for West Indies.