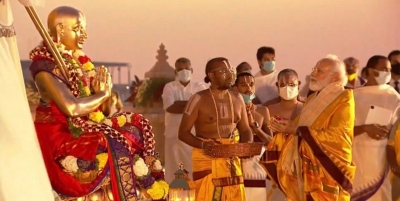 At an elaborate ceremony held at Tridandi Chinna Jeer Swamy’s ashram at Muchintal on the outskirts of Hyderabad, he dedicated to the world the giant statue which commemorates Ramanujacharya’s teachings promoting equality in all aspects of living including faith, caste and creed.

Modi visited the 45-acre temple complex housing the statue and the identical recreations of 108 Divya Desams or ornately carved temples. Earlier, he also participated in puja and other rituals as part of the ongoing 12-day Sri Ramanuja Sahasrabdi ‘Samaroham’, the 1000th birth anniversary celebrations of Ramanjuacharya

The statue is made of ‘panchaloha’, a combination of five metals: gold, silver, copper, brass, and zync and is among one of the tallest metallic statues in sitting position, in the world.

The statue is mounted on a 54-feet high base building, named ‘Bhadra Vedi’, has floors devoted for a Vedic digital library and research centre, ancient Indian texts, a theatre, an educational gallery detailing many works of Ramanujacharya.

In the presence of Chinna Jeeyar Swami who presided over the event, the Prime Minister watched a 3D presentation on the life journey and teaching of Ramanujacharya.

The Prime Minister, in his speech, underlined the importance of the teachings of Ramanujacharya. He emphasised that development and social justice should reach all sections of society without any differences and those who were victimised for generations should be made partners in development. He said the transforming India was making all out efforts in this direction.

Modi said the statue of equality will inspire the future generations and strengthen Indian philosophy.

He said the freedom struggle is not only a fight for demonstration of strength but also an expression of live and let live, an ancient Indian philosophy.

Modi noted that Hyderabad with which Sardar Vallabhbhai Patel had an inseparable link has now become a place of statue of equality while his home state Gujarat is home for the statue of unity.

The Prime Minister revealed that he prayed for the welfare of people of India while taking part in the purnahuti of Vishwaksena Ishti.

Chinna Jeeyar Swami said Ramanujacharya remained a true icon of equality for 1,000 years and hoped that this project would ensure that his teachings are practiced for at least another 1000 years. “Our mission is to make the statue of equality a culturally paramount destination for people across the globe and inspire everyone to make the world a more equal place to live,” he said. (IANS)