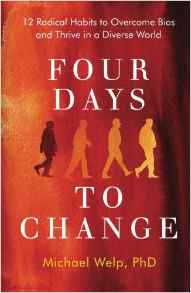 PORTLAND, OR—With recent startling headlines, there is undoubtedly an immense amount of work to be done to eradicate bias and discrimination in America. Since this country starts and stops on economics, change in the workplace is fundamental if a national paradigm shift is to be achieved.

One report cites the fiscal damage of workplace discrimination at $64 billion annually. But as it turns out, that number could be considerably higher—perhaps in the trillions of dollars.

Bill Proudman and Michael Welp founded, White Men As Full Diversity Partners, 20 years ago as an answer to a question most people never thought of asking: Why is the white male, who holds most CEO and C-level positions, left out of the diversity and inclusion discussion? From there, Proudman and Welp developed a rather unorthodox approach to diversity consulting by engaging white male leadership directly, while including everyone in the discussion.

In the foreword to Welp’s new book, Four Days to Change, Proudman summarizes what motivated their mission, “Our job as white men has been to keep our heads down and defer all questions to others. If we wanted to make change, we were expected to wait for others—be they women, people of color, or members of the LGBT community—to instruct us on what to do. Meanwhile, we walked on eggshells, afraid of being admonished for saying the wrong thing or not doing the right thing.”

And while “corporate America” may seem like an immense faceless and emotionless entity, it does respond primarily to one thing: THE BOTTOM LINE. And it can be broken down like this:

Recruitment: Systemic bias—often unconscious—is a costly stumbling block. Ninety-six percent of all Fortune 50 companies have sexual orientation nondiscrimination policies in place, but getting them understood and instinctively followed is imperative for these policies to work.

Retention: Two million workers leave their jobs each year because of unfair treatment due to race, gender, religion or sexual orientation. Replacing them costs corporations an additional $5,000 to $10,000 per worker and $75,000 to $200,000 per executive. These individuals must seek new jobs or face going on unemployment in order to provide for their families, which then costs the government and, in turn, the taxpayers.

Job Performance: Nothing demotivates a worker quite like unfairness and injustice, which can play out as lowered productivity, damaged morale, absenteeism, illness and depression. The cost of workforce absenteeism is in the billions.(4) One report cites the annual cost of workforce illness alone—from sick days to workers’ compensation—at $576 billion.

At the federal fiscal level, the economics of discrimination—in all its forms—expands exponentially.

A study, released by the W.K. Kellogg Foundation in October 2013, took a comprehensive look at racial inequality in America and how it affects our economy.

The study addressed health care inequities, unjustified incarceration disparities, lesser employment and education opportunities, the income tax gap and other facets of the economy. It found that earnings gains would translate into $180 million in additional corporate profits, $290 billion in additional federal tax revenues, and a potential reduction in the federal deficit of $350 billion—or 2.3 percent of the GDP—adding up to $1.9 trillion each year.

With a diverse client list that includes Alaska Airlines, Dell, Eastman Chemical, Rockwell Automation and many others, Proudman emphasizes that individual people in fact, build a corporation. He said, “We have worked with many executives in careers that you might not consider as valuing empathy, such as finance and high tech, who have had a transformative shift in their ability to lead and partner across difference.”

From the micro look at an HR office to a corporate boardroom, or the macro view of a vast corporate landscape to a national economy, it is evident that the work of pioneers such as Proudman is needed for the nation’s healing and prosperity.

White Men As Full Diversity Partners (WMFDP) is a diversity and leadership development firm founded by Bill Proudman, Michael Welp, Ph.D., and Jo Ann Morris, in 1996 in Portland, Oregon. WMFDP takes an unorthodox approach towards eradicating bias and discrimination in the workplace.