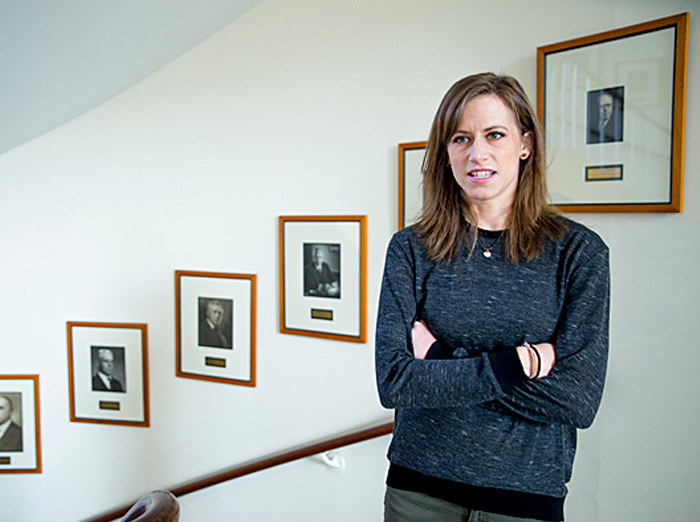 While the pay gap between men and women stubbornly remains, gender discrepancies in other important realms, like education, have closed.

Women in 2014 were more likely to have a bachelor’s degree than men for the first time since the U.S. Census bureau began collecting higher education statistics in 1940. In fact, since the 2005-2006 academic year, women have received the majority of the bachelor’s, master’s, and doctoral degrees conferred nationally, according to the National Center for Education Statistics (NCES), a research body within the U.S. Department of Education.

Despite the advances, women hold just 37.5 percent of the tenured positions at U.S. colleges and universities, even though they held nearly half (48.4 percent) of all tenure-track positions in 2013, NCES data show. Women in an array of fields report experiencing treatment suggesting they’re less valued by employers than their male counterparts, including getting lower pay and fewer promotions, seeing male colleagues praised or taking credit for ideas that were first voiced by a woman — but ignored — or presumptions that a woman must be a junior team member in a coed working group, rather than the leader.

After hearing such complaints from friends, Heather Sarsons, a Ph.D. student in economics and a doctoral fellow in the Harvard Kennedy School’s Multidisciplinary Program on Inequality and Social Policy, wondered about this feeling that women were getting shortchanged when it came to receiving their due recognition in fields historically dominated by men, like STEM, technology, and economics.

Sarsons said that despite the uptick of women in doctoral programs for economics, they remain underrepresented, both in number and in proportion to their degree attainment, among the ranks of tenured faculty. It’s a troubling gap that the field has been grappling with for some time.

Because research papers published during the first several years of a career are so critical in determining whether a young economist receives tenure, Sarsons reviewed 40 years of data on the publishing track record of people who were recruited by top U.S. universities to see whether the disparate tenure rates between men and women were related to the number or type of papers on which each gender was evaluated.

She found that women economists suffer a “co-author penalty.” While men receive the same professional credit for solo-authored papers as for work done with a woman or another man, women aren’t properly credited for their work when they co-author a paper with a male colleague. It appears the only time women get full credit, Sarsons said, is when they work alone or team up with another woman — both less than optimal scenarios for fairness, given the inherently collaborative and complex nature of economics research.

The Gazette spoke with Sarsons about why women appear to be penalized for working with men, the reaction her work has received, and what can be done about it.

SARSONS: I wanted to see if there were differences in how a co-authored publication matters for a woman’s career advancement as compared to a man. I found that an additional co-authored paper, while it’s still positively correlated with receiving tenure for a woman, leads to a much weaker effect than a boost that a man receives. An additional co-authored paper for a man is counted as the same as a solo-authored paper, according to my results. But for a woman, it’s weighted much less than if she had written the paper on her own. Because these are all just correlations, I can’t say exactly what’s going on. But I tried to look at whether women are presenting less or whether they know that the returns for co-authoring are a bit lower, like they’re not going to get as much credit, because then they might be co-authoring strategically. I didn’t find evidence of any of those theories.

Because in economics the authors are listed alphabetically, you can’t tell who did what on the paper. So I just wanted to see if when women co-author, is their contribution discounted? To look at that, I looked at whether or not they received tenure. I compare women who co-author a lot to women who write most of their papers on their own, and you see this really different relationship with tenure.

GAZETTE: Is what you call the “co-author penalty” for women the result of explicit bias?

SARSONS: I can’t say for sure. I would guess it’s unconscious bias because I have found myself sometimes, if I’ll read a paper and I haven’t looked at the author’s name and then I look and it’s a woman, I find that I’m kind of surprised. And I am a woman, so I shouldn’t be having that kind of reaction. I think when you’re in a male-dominated profession, it’s easy to have that kind of mindset. It could also be that when women work on a paper with a group, they take less credit for it. I did a survey with current faculty at a bunch of different econ departments and asked if they’re more or less likely to present their co-authored work than their [male] coauthors. And women said that they’re just as likely to present their joint work as their [male] coauthors, so it doesn’t seem like it has anything to do with [women] not presenting their work [or that] they let the man present the work. It could be something much more subtle, like when they talk about their work with others, they really downplay their own contribution, whereas men don’t do that.

GAZETTE: What prompted your interest in this research?

SARSONS: I was working on another project with my advisor on how minority students are perceived [when] working in a group and, if there’s a policy like affirmative action in place, for example, if women and minority students get the short end of the stick and people make assumptions about how much they’ve contributed that are inaccurate. It’s something that has come up in talking with some of my friends who are in academia about [how] they’ve worked on something in a group and felt like they didn’t necessarily get as much credit as their male co-authors did, especially in the sciences. So I got interested and wondered if this was something that is actually happening.

GAZETTE: What kind of reaction have you gotten from colleagues?

SARSONS: I’ve gotten mixed reactions. Most people have been surprised. A few people have said, “I’m not surprised; I’ve sat on a tenure committee before, and this definitely came up.” Like when they were evaluating a woman’s research, it came up, like “How much do we think she actually contributed?” But more often than not, I think people have been surprised. Within economics, there has been a conversation around gender bias, but it hasn’t focused on group work and how we perceive group work and people’s contributions. I think people are surprised by how large the effect is. The faculty has been really helpful in trying to figure out what are the different things that could possibly be explaining this and how I could go about testing this.

GAZETTE: Many who first read about your paper in The New York Times recently said this problem of undervalued contributions exists in many domains, such as STEM fields and business. Do you think your findings might explain some of those gaps, or are they unique to economics?

SARSONS: I can’t say for sure. I wouldn’t be surprised if this happened in other areas of work. Since the article came out, I’ve received quite a few emails from women in law or in the tech industry, and they said kind of the same thing: When they’re working on a project, their supervisor or whoever is above them doesn’t see the group working on it, and they felt like their contribution has been undervalued, and that’s manifested itself in differential bonus payments and that kind of thing. So it’s all anecdotal evidence; it’s very possible, and it would be interesting to get data from different industries to see if this does show up in law or in tech.

GAZETTE: So what should individual women do, and are there any systemic remedies that might be effective?

SARSONS: Changing the alphabetical [traditional credit] to order of contribution could help. I would worry that then you might get into the problem of, if women are less likely to speak up and say, “This is my contribution, and so I should be first author,” then the problem remains. My hope in doing this is just that it brings this phenomenon to light, and then in the long run I hope when people are evaluating work they might stop and think twice how they’re dividing credit. It is also about women not taking enough credit for their work, maybe being a bit more assertive there. The immediate reaction people have is “Oh, women should solo author.” That’s not really what I wanted to get across. I don’t think women should have to change their behavior, because it’s much more fun to collaborate, and you write better papers. I hope just bringing this to light will make some people slow down when they’re making these decisions and think about whether they’re giving credit unequally based on gender or race.

GAZETTE: Knowing what you know now, will this change how you’ll approach research in the future?

SARSONS: I don’t think so. I would maybe try to be a bit more conscious about what I’m doing and the ownership I’m taking over my work, but I much prefer to collaborate than write papers on my own. I’d be very sad if I got to the tenure point and then this all kind of backfired. But I don’t think I will not collaborate because of this.

This interview was lightly edited for clarity and length.

(This article is reproduced here with permission from Harvard Gazette.)