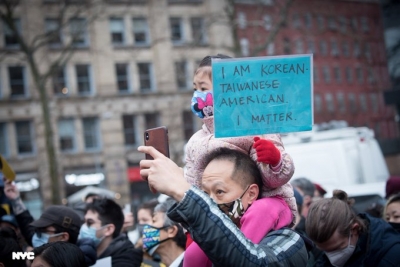 Protesters on Sunday held signs saying, “Rise up against Asian hate. We deserve to be safe”, reports Xinhua news agency.

Taking to Twitter on Sunday, Schumer said: I’m proud to stand with the @AAFederation at today’s #RiseUpRally in New York City to stop hatred against Asian-Americans.

“The surge in attacks against Asian American communities is alarming, ignorant, and dangerous. We cannot and will not tolerate racism and discrimination.”

“New York, we love diversity. We know the more of us who are together from every different background in race, creed, colour, orientation and gender, the stronger we are. We love immigrants.”

De Blasio urged people to get out the message of stopping Asian hate not just in New York City, but all over the US.

“Anyone who commits an act of hatred against the Asian-American community will be found, will be arrested, will be prosecuted,” he said.

The Mayor asked every community to stand with the Asian community right now because “if Asian-Americans are being attacked, every single one of us is vulnerable”.

Meng encouraged people to be visible and speak up as people are literally scared to leave their homes.

New York Attorney General Letitia James also encouraged victims to come to her office so as to “go after these individuals who hate us and shut them down”.

New York City documented as many as 259 anti-Asian incidents in 2020 mostly involving verbal harassment, according to a report by the Asian American Bar Association of New York. (IANS)