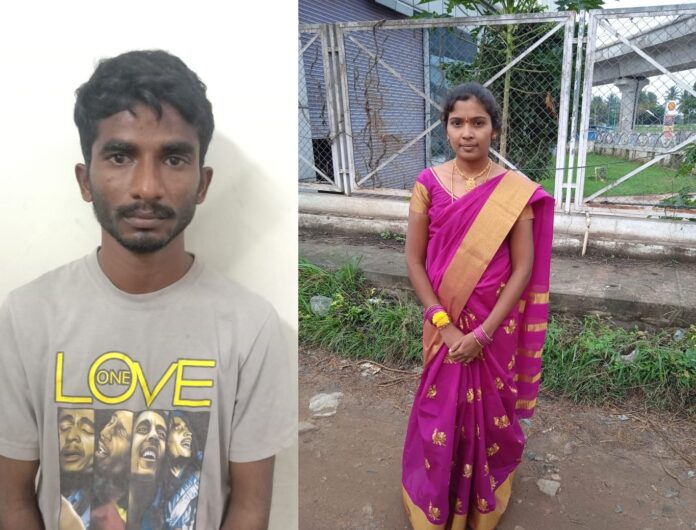 Bengaluru– In another shocking crime reported from Karnataka, a youth in Bengaluru on Monday slit the throat of his former co-worker right on a road after she rejected his marriage proposal again, police said.

The victim was identified as Anita, 23, a private company worker, and the accused as Venkatesh, 22. Both hailed from Andhra Pradesh, had worked for the same company for three years, and were known to each other very well.

The incident took place when Anita was walking towards her workplace at about 7 a.m. Venkatesh stopped her and proposed to her. When Anita rejected him, he took out a knife and slit her throat.

When blood began gushing out of her neck, Venkatesh, with the help of her co-workers who were on the same stretch, took her to a nearby hospital, where she succumbed to her injuries.

DCP, West, Sanjeev M. Patil said Venkatesh has been arrested and the police have also seized the weapon from the scene of crime.

“Preliminary investigations suggest that the accused and victim were close to each other. They were working in a private company as staff checkers and also distributed goods to retail shops. Three months ago, Venkatesh joined another company. But, they lived on different floors of the same building,” he said.

Lakshmi and Venkatesh were very close. Her father objected to it and she moved away from him. Venkatesh had also approached the victim with a marriage proposal on Saturday and had been rejected. On Monday, he bought a knife in a supermarket for Rs 80 and used it for the crime, the DCP said.

It has been gathered that Lakshmi’s parents got her married with a relative while she was a minor. Lakshmi had told Venkatesh that she is getting married. It is not known if she was marrying the same person or a different one. The police are collecting further information.

Even as the horrific Mysuru gang rape still figures in the headlines, there have been a number of such cases in Karnataka in the recent period.

Just last week, a jilted lover had repeatedly stabbed a woman college student in Bengaluru for spurning him time and again. In Mysuru, a gang of robbers, emerging with their haul from a jewellery shop, had shot and killed a passerby on the fears that he could identify them or foil their escape. (IANS)