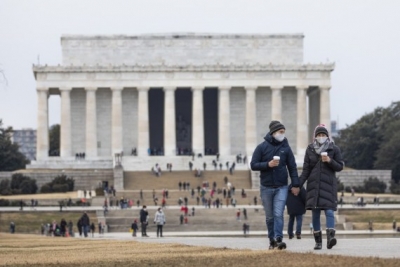 Washington– New Covid-19 cases, hospitalisations and deaths across the US have continued to increase at a record level as the majority of the country is experiencing substantial or high transmission, Director of the Centers for Disease Control and Prevention (CDC) Rochelle Walensky said.

“We continue to see cases, hospitalizations, and deaths increase across the country. And now over 90 per cent of counties in the United States are experiencing substantial or high transmission,” Walensky said in a White House Covid-19 Response Team briefing on Thursday.

According to Walensky, the seven-day average of new Covid-19 cases reached about 113,000 per day, a nearly 24 per cent increase from the previous week.

Hospital admissions rose 31 per cent, to an average of 9,700 hospitalisations per day, and fatalities increased to 452 per day, a 22 per cent spike from the prior seven-day period, she said.

“As we’ve been saying by far, those at highest risk remain people who have not yet been vaccinated,” the CDC Director added.

Walensky’s comments came a day after the latest CDC forecasts indicated that the country’s Covid-19 hospitalisations and deaths are likely to increase over the next four weeks.

As of Friday morning, the US’ overall caseload and death toll stood at 36,305,005 and 619,098, respectively, according to the Johns Hopkins University.

The two tallies are the highest in the world, making the US the worst-hit country.

Till date, 50.3 per cent of the US population have been fully vaccinated against the virus, according to CDC data. (IANS)