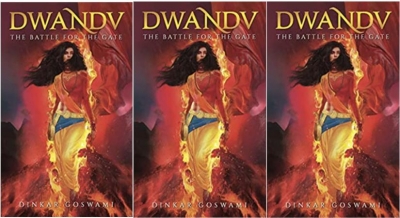 New Delhi– Replete with all elements of a mythological sci-fi thriller, USA-based Indian author Dinkar Goswami’s new novel “Dwandv: The Battle for the Gate” is the compelling story of an American yogini set upon a challenging odyssey in the Himalayas.

Launched a few weeks before the International Women’s Day, the book follows the powerful female protagonist who climbs the great Himalayan heights and escapes treachery, hardship and loss as she races against time. The book also includes narratives on single motherhood in the face of adversity, set in the universe of mythology and fantasy.

As the book unfolds, readers join Gerua and her five-year-old son Danta on a quest of defeating a demonic army and averting devastation on Earth.

According to the author, the protagonist is a young American woman who has Indian roots. “As you read about her in ‘Battle for the Gate’, you will realise how and why I chose her. Only an extraordinary woman like her could have fitted the role,” Goswami told IANS. The son of an economist and an art teacher, Dinkar was influenced by his yogi grandfather at an early age who helped him realise the importance of the knowledge about the human spirit, and how to develop this through yoga.

The book is dotted with elements of history, yoga, technology and the cosmos. In the book’s universe, she is up against Bubba, a sinister master tantric aghori consumed by power and backed by the demonic army.

“Today’s science fiction may be tomorrow’s reality. The domain of science fiction is not just our world but the universe. Endless imagination. I watch movies. I also read. I have long desired to write a novel. So, I chose a subject — Vital Knowledge of yoga, which some say is the science of the spirit. But that aspect of this Vital knowledge is complex. Because understanding this aspect is a huge endeavor. I tried to make it simple and exciting to read so it is enjoyable.”

‘Dwandv’ is marketed and distributed by Brand Inspire and launched last week. (IANS)