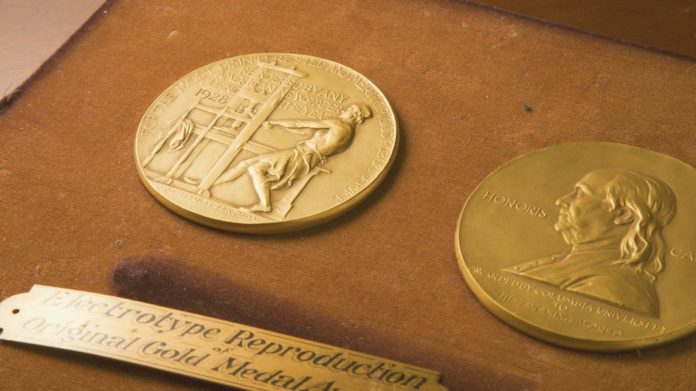 New York– Awarding the prestigious Pulitzer Prize to three Indian photographers, the Pulitzer Board at Columbia University claimed that it was for their work in Kashmir as “India revoked its independence”.

The award to Channi Anand, Mukhtar Khan and Dar Yasin in the feature photography category for their pictures for the Associated Press was announced on Monday.

The prizes, considered the most prestigious for US journalism, are associated with the university’s Graduate School of Journalism where the judging is done and is announced, although this year it was done remotely.

Besides a certificate, the prizes carry a cash award of $15,000, except the public service category for which a gold medal is awarded.

The public service prize went to The Anchorage Daily News for a series that dealt with policing in Alaska state.

In making the award to the three, the Board said on its website that it was “for striking images of life in the contested territory of Kashmir as India revoked its independence, executed through a communications blackout”.

Besides making the false claim about “independence” of Kashmir being “revoked”, the board that includes several leading journalists did not explain how their photographs could have reached the AP within hours of the incidents recorded “through a communication blackout”.

India’s Central government only revoked Article 370 of the Constitution that gave Jammu and Kashmir a special status and it was not independent.

The wording of the award announcement calls into question the credibility of the Pulitzer Board that gives out what are considered prestigious journalism awards.

The portfolio of pictures by the three on the Pulitzer web site included one of a masked person attacking a police vehicle and another of masked people with variants of the Kashmir flag, besides photos of mourners and protesters.

One of the finalists for the Pulitzer Prize for explanatory journalism was a reporter of Indian descent at The Los Angeles Times, Swetha Kannan, who was nominated for her work with two colleagues on the seas rising due to climate change. (IANS)