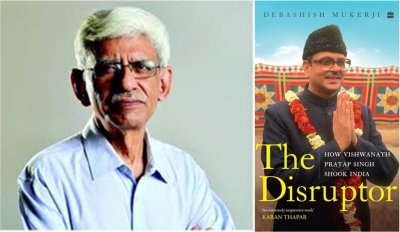 Primarily remembered for implementing the recommendations of the Mandal Commission report, which provided reservations in Central government services for the first time to the Other Backward Classes, he deserves a place in history for much more — from conducting raids on the biggest business houses of his time when he was Finance Minister to investigating defence deals as Defence Minister (which cost him his job); from bringing together a divided Opposition to form an unlikely coalition government at the Centre comprising the BJP and the Communist parties to spearheading the biggest airlift evacuation in Indian history — of Indians stranded in the Middle East during the first Gulf War.

V.P. Singh weathered repeated crises during his eleven-month tenure: The rise of insurgency in Kashmir, starting with the kidnapping of his Home Minister’s daughter by terrorists; L.K. Advani’s Rath Yatra in support of Ram Mandir in Ayodhya, which led to communal riots; and, above all, the backlash that followed the Mandal Commission report’s implementation.

V.P. Singh ended up antagonising both the Congress and the BJP — perhaps one of the reasons he has not been given the posthumous attention he deserves. Debashish Mukerji’s “The Disruptor” (HarperCollins) is a richly detailed account of his extraordinarily eventful life, told in the context of his times.

Here’s a sneak peek into the book:

“By bringing together a divided Opposition to usher in an era of coalition governments at the Centre, as also by implementing the Mandal Commission report which provided job reservations for the Other Backward Classes, Vishwanath Pratap Singh permanently altered India’s political landscape,” says author Debashish Mukerji.

“A politician ambivalent about pursuing power, and obsessed with financial integrity, he was also an extremely complex human being. The main issues he confronted – caste disparities, communal tensions and corruption – continue to bedevil the country even today. All these reasons prompted me to attempt this biography, which sets V.P. Singh against the context of his turbulent times,” Mukerji adds.

Says Siddhesh Inamdar, Executive Editor, HarperCollins India: “V.P. Singh was Prime Minister of India for just about eleven months, and yet his short time in office proved immensely consequential in shaping the country. As a leader who took on a party with an overwhelming majority in Parliament, his career is also relevant in the context of the politics of today.”

“For all his achievements, V.P. Singh remains an understudied former Prime Minister. November marks the anniversary both of his death (in 2008) as well as of the fall of his government (in 1990), and this meticulously researched biography by a seasoned journalist will throw much-needed light on Singh’s extraordinary life and times,” Inamdar adds. (IANS)