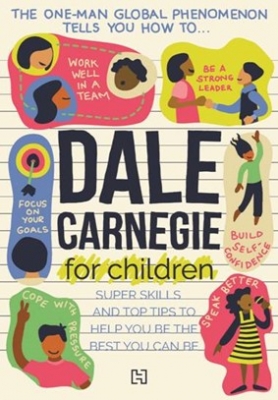 New Delhi– In yet another affirmation that old is gold, heres an amazingly easy-to-read book that sparkles with stories and simple super-tips, carefully selected for young readers from the best-selling works of American writer, lecturer and developer of courses in public speaking, self-improvement, interpersonal skills and corporate training Dale Carnegie (1888-1955).

Highlighting important skill sets like speaking well, getting others to listen to you, being a good leader, working smoothly in a team, and putting mistakes and setbacks behind you, “Dale Carnegie for Children” (Hachette) will help the youth of today handle everyday pressures of doing well and stay right on top of things.

“There is a remarkable emphasis on empathy that runs throughout Carnegie’s body of work, whether he’s talking about mastering public speaking or being a better conversationalist or even dealing with anxiety-inducing situations,” the multi-faceted Ashwitha Jayakumar, who abridged and adapted Carnegie’s selected writings for the book, told IANS in an interview.

“His solutions are less ‘quick fixes’ and more long-term strategies for meaningful self-improvement and they invariably centre on being kinder, nicer to people and generally more understanding of other people’s needs,” she added.

This explains Carnegie’s relevance even in today’s world.

“I came to Carnegie’s work expecting the sort of flashy corporate showiness that I associate with a lot of modern self-help works, but was surprised and pleased to note that Carnegie isn’t interested in showing people how to perform flash-and-bang verbal pyrotechnics but in fostering relationships and means of communication that are rooted in real, genuine feelings,” Jayakumar elaborated.

“The more I read his work, the more it seemed to me that Carnegie understood the anxieties of modern life, and the social and psychological stresses we all face. This deep understanding of people’s timeless fears and worries, especially in terms of how other people see them, is what makes his work so relevant even today.

“He seems to instinctively ‘get’ what it’s like to be terrified of standing up in front of a crowd, to be afraid you’ll make a fool of yourself, to feel social anxiety at a party, or to let stress get to you. These are fears we all have and his advice is very useful in helping to deal with them,” Jayakumar added.

How did she go about picking the “sure fire” solutions from Carnegie’s immense body of work?

“I essentially looked for Carnegie’s tips and advice on subjects and situations that young people today are likely to face, either in social settings or academic ones. And there was also some effort put towards striking a balance between more general advice on how to build up your confidence or make new friends, be a good team player and leader, and specific strategies for how to research and prepare a speech and use your voice effectively.

“Another major challenge was adapting the language, tone and style to something that’s more modern, and using relevant examples — Carnegie typically included stories about business tycoons or long-forgotten public figures, so those had to be reviewed for relevance,” explained Jayakumar, who started out in publishing as an editor over a decade ago and has “since tumbled into writing children’s books (or adapting works written for adults to be suitable for young readers)”.

“I’ve always loved history and am currently trying to put my historical and literary training (I have master’s degrees in English literature and medieval studies) to use by writing well-researched and interesting historical nonfiction for kids,” she said.

What’s next? What’s her next project?

“I’m finishing up a work of original non-fiction (not adapted) that will be out later this year. There are also at least three more works of non-fiction that I’m meant to be researching and writing in 2022 and 2023 for various publishers, so I’m looking forward to spending the next two years blissfully buried in research,” Jayakumar concluded. (IANS)

40,000 kids in SL may suffer from malnutrition in coming months:...