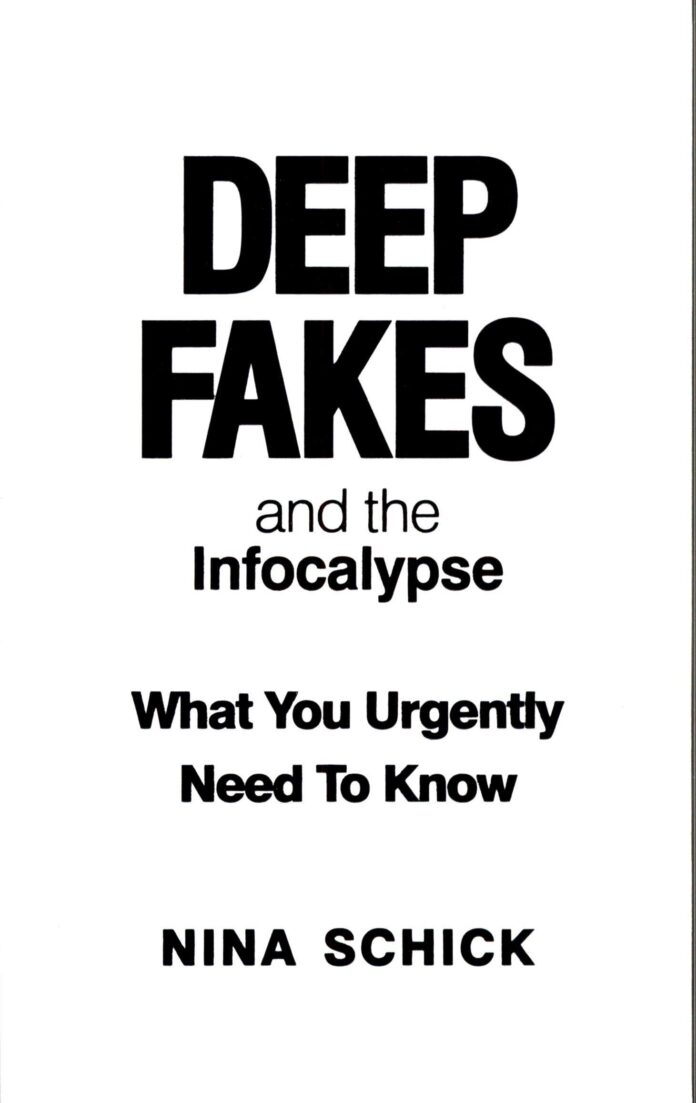 New Delhi– The Soviets used an Indian newspaper in 1983 to spread disinformation that the AIDS virus had been invented by the US military as a “biological weapon to kill black and gay men” and this echoed for decades. There’s greater sophistication today, says a new book on the threat to democracy and personal liberty from fake news generated by Advanced AI technology, with Russia fine-tuning the concept in this age of the Infocalypse, which the author defines as the “increasingly dangerous and untrustworthy ecosystem within which most humans now live”.

“Before we get to the Russian disinformation of the Infocalypse, let’s look at one of the old Soviet campaigns, usually referred to as Operation Infektion,” Nina Schick writes in “Deep Fakes and the Infocalpyse – What You Urgently Need To Know” (Hachette/Monoray).

“In July 1983, article entitled ‘AIDS may invade India: Mystery disease caused by US experiments’ appeared in The Patriot, an obscure publication printed in New Delhi. This piece made a bombshell accusation: the deadly AIDS virus had been invented by the military as a biological weapon to kill black and gay men,” writes Schick, a broadcaster and author who specialises on how technology and AI are reshaping politics.

“The story cited a letter from an anonymous but ‘well-known American scientist and anthropologist’ to support its explosive claims” that Fort Detrick, a US military base in Maryland, was at the centre of the allegations,” writes Schick, who has worked on foreign interference in the 2016 and 2020 US elections and on the evolution of mis- and disinformation.

During the 1940s, Fort Detrick was home to the Pentagon’s super-secretive biological weapons programme and a type of anthrax bomb was invented there during WW II but never went into production as the conflict ended. It was also involved in a project to spread yellow fever through infected mosquitoes but the US biological warfare programme began to decline in the 1960s as President Richard Nixon denounced the use of such weapons. By the 1970s, Fort Detrick’s remit had been radically scaled back to focus on defence against biological weapons rather than their production, the book says.

“The Patriot reported otherwise, claiming that US government scientists had scoured Africa and Latin America in secret missions to identify highly infectious pathogens, eventually leading to the creation of AIDS at Fort Detrick. The accusation of biological warfare was a trope that the Soviets used repeatedly against the Americans in the Cold war,” Schick writes.

In 1983, “when the Soviets planted a seed of disinformation in a Soviet-sponsored Indian newspaper”, it was before “the birth of our modern information ecosystem, so this outrageous lie would have to be carefully cultivated to achieve virality. It took six years, but the Soviets managed to make it go global,” the author says.

“The myth went quiet for a few years but the Soviets continued to accuse the US of pursuing an offensive biological-weapons warfare programme in violation of international laws”. In 1985, a Radio Moscow broadcast claimed that the CIA was spreading dengue fever in Cuba and helping South Africa develop a biological weapon against its black population, the book says.

“Suddenly, in 1985, the AIDS claim resurfaced in the influential Soviet weekly Literaturnaya Gazetta. In an article headlined ‘Panic in the West, or What is hidden behind the sensation about AIDS?’ the journalist Velentin Zapevalov repeated the AIDS conspiracy claim, citing the ‘well-respected Indian paper The Patriot.’ He obviously neglected to reveal that the story had been planted there by the Soviets,” Schick writes.

The next year, a ‘scientific’ report entitled ‘AIDS: Its Nature and Origin’ by Professor Jacob Segal emerged, supporting the claim that AIDS was man-made. Closer examination revealed that Dr. Segal was a retired 76-year-old East German biophysicist. The co-author was his wife, Dr. Lilli Segal, also retired, an epidemiologist, and also East German.

As the AIDS epidemic worsened, the Soviets stepped up the campaign, the book says. Through 1986, a flurry of articles surfaced in the Soviet press repeating that the AIDS virus was created in a Pentagon laboratory. These reports were relayed globally by Soviet news agencies TASS and RIA Novosti, which together had over a hundred bureaus worldwide.

“The Soviets paid, tricked or otherwise incentivized local publications in the developing world to reprint the story,” Schick writes.

By 1986, “the story had started to go viral and appeared in dozens of sympathetic as well as unsuspecting newspapers around the globe. This included the West”, where it was printed on the front page of the Sunday Express along with an interview with Jacob Segal.

Segal’s claims “were soon debunked in Britain by conflicting reports in The Times and The Sunday Telegraph. Nevertheless, the operation was a great success: by the end of the decade, the story had appeared in major newspapers in more than 80 countries. It was particularly virulent in Asia and Africa, where the lie received prominent play. The US image was tarnished around the world,” the book says, adding that “its legacy is doing great harm” and even affected Barack Obama.

“It emerged that Obama’s former pastor, the Reverend Jeremiah Wright, had claimed that the HIV virus was created by the US government as a tool of genocide against Black Americans and Obama was forced to publicly disown him.

“A seed planted by the Soviets in India in 1983 had come back to haunt the man who would become the first African-American President 25 years later. If the one lie at the heart of Operation Infektion lives on 40 years later, imagine the havoc that disinformation can wreck in the Infocayplse. Or what it could do when it is accompanied by deepfakes,” Schick writes.

What’s the lesson in this for the world at large?

Contending that the Infocalypse “is evolving into an even more potent phenomenon with dangerous implications for everything from geopolitics to our individual lives,” Schick notes that while it had enabled Russia to forge way ahead of the pack in the disinformation game, China has been a quick learner and had been joined by other emerging actors like Iran, Saudi Arabia, the UAE and North Korea. Oxford University researchers had found evidence of 28 countries “practicing some form of online disinformation operations in 2017”.

In 2020, “this number has risen to 70. While all these state actors pose serious threats in the Infocalypse, for now there are orders of magnitude between the sophistication of the Kremlin’s efforts and those of the others. In one study from 2019, researchers from Princeton found that Russia was responsible for 72 per cent of all foreign disinformation operations between 2013 and 2019. This makes it almost three times as aggressive as all the others”.

“If Russia is a maestro playing a Tchaikovsky sonata from memory on a grand piano, then the others are playing ‘Twinkle, Twinkle, Little Star’ on a child’s keyboard,” Schick writes.

But then, all is not lost, as the tiny Baltic nation of Estonia, with a population of 1.3 million, proved. It had gained its independence from Russia in 1991 but faced three weeks of vicious cyber attacks against its government, media and banking infrastructure following its decision in 2007 to relocate the Bronze Soldiers of Talinn, a memorial to the occupying Soviet soldiers killed in the Second World War.

“Instead of crumbling, Talinn used the lesson to reinforce its defences and fight back. It did this by taking a society-wide approach that engaged all its citizens” to become one of the most digital nations in the world: 99 per cent of public services are online, nearly one-third of its citizens vote online and it has not suffered a further Russian breach of its defences”, Schick writes.

“The forces to fight the Infocalypse are already coming together and growing in strength. They are helping us understand the threat, and they have also started building the solutions and alliances to help safeguard us all. But they need our support. We can help by sharing this understanding, preparing our defences and fighting back. Time is of the essence…

“Be careful about what information you share. Verify your sources. Correct yourself when you get something wrong. Be wary of your own political biases. Be sceptical but not cynical…It’s time for all allies to unite. As the Estonians did to the Russians, we still have the chance to say ‘no’ to the Infocalypse,” Schick concludes. (IANS)