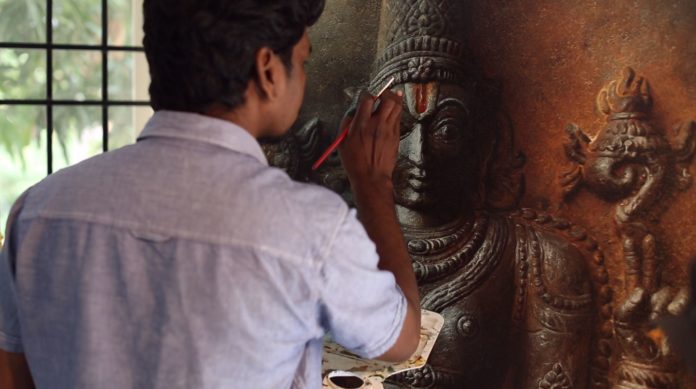 BOSTON, MA – The newly rebranded South Asian Art Gallery (formerly Asian Art Gallery) is showcasing Min Wae Aung – an internationally acclaimed artist from Burma and B. Venkatesan – a Rembrandt inspired self-taught Indian artist, both of whom through the show transcend borders to tell the story of two different cultures and unite them through art.

The Spring 2019 show opened on Saturday and will remain open till May 18th 2019.  The artist Min Wae Aung attended the opening reception.

Min Wae Aung is all about detail and methodology, yet he makes his completed canvases seem as if they were the simplest thing to do. He is also one for bold expanses of color, minimum of fuss with his brushes, focusing only on the necessary. He paints with a gusto that is rare among post-modern syndrome artists. Min Wae is from the State School of Fine Arts, Yangon, Myanmar.

Min Wae Aung was born in 1960 in Danubyu, a river port city in the Irrawaddy Delta. His father hauled goods for a living. Min Wae Aung spent much of his childhood playing at a nearby monastery, a second home of sorts, where he befriended novices and helped the monks with their tasks. 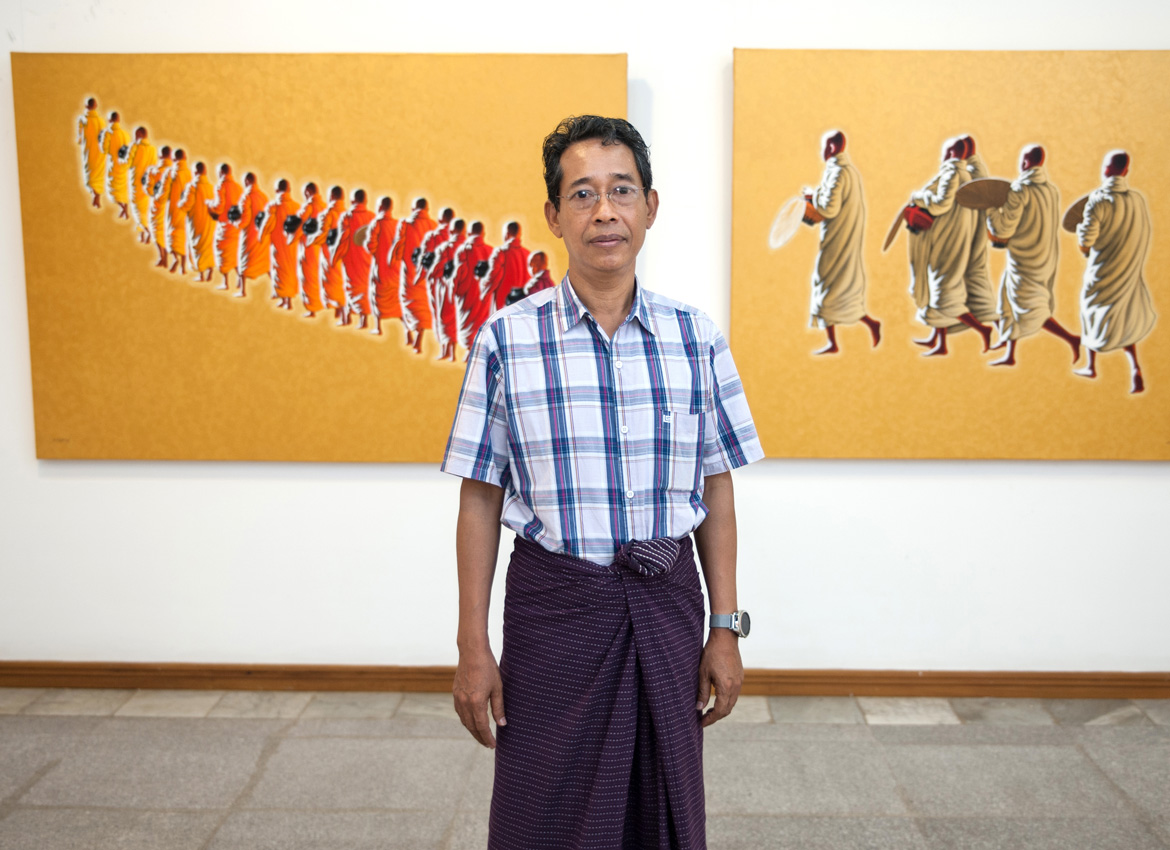 Today, Min Wae Aung—one of the country’s most celebrated contemporary artists—is best known for his stylized depictions of Buddhist monks in vivid, burnt-orange robes on striking gold backgrounds. Faces are rarely shown, because Min Wae Aung likes to emphasize the monks’ movement, and he says their anonymity helps convey how they are “leaving humanity behind” and going to “a peaceful place, like Nirvana.”

Min Wae Aung is an artist in love with his country and his people. All his works are of his people as observed during his travels across the region. He has them talking, walking, working, but always on their feet, as they would in their daily lives. The paintings also tell the viewer the tale of where the artist has been traveling through. He loves to depict his people in scorching reds and golden yellows. The colors are intense, black and white being used as shadow and highlight. His uncompromising, monochromatic palette of either red or yellow, is a feat, letting each figure seem etched out of the background of the painting. With Min Wae Aung what one gets to do is peer into each painting, as if standing in the shade and looking out at the heat of the day.

The founder of South Asian Art Gallery, Santhana Krishnan met Min Wae Aung 3 years back on hist visit to Myanmar and kept his promise to him that he will host his first show in the United States.  The other artist showcased is B. Venkatesan who was discovered by a curator of SAAG and was financially supported so that he could focus on art. Now Venkatesan is considered to be a very promising artist with his skills and techniques improving dramatically year over year.

Venkatesan is a self-taught artist hailing from Chennai, Tamil Nadu. Venkatesan sees art in people, articles and places that others around him pass up for the mundane. According to him, everyday life is what completes the bigger picture. Venkatesan’s first muse inarguably is nature and his immediate environs. He once said drawing those exact things made him feel complete. Nature is his primary teacher and the main source ofinspiration of his works. As much as he learnt from the luminaires in the field of art, he claims to have learnt from nature – angles, the play of light, the movement of water, human body… Venkatesan is a realistic artist. He recreates images from memory or references, as one would see them in real life. The degree of reality in every canvas he finishes is uncontested. His student-like hisattention to painting belies the fact that he is actually quite the master artist. What he can achieve with the play of light in his works has only so far been observed in the likes of Vermeer and Rembrandt. Venkatesan’s works carry that unmistakable touch of yellows, ochre and gold. A self-taught artist, Venkatesan says, “While my themes maybe mundane to the viewer, it is ‘life as it is’ that I paint. To others those instances or activities may be commonplace, but I want to preserve some of those memories with my art. My art could tell you a lot – where I have been, the people I have met and circumstances I have come to pass, and so on.”

The South Asian Art Gallery (SAAG) is a social enterprise that is invested in making the world a better place through art. It’s an open canvas where different artists, art enthusiasts and communities come together to share their common love for art.

SAAG is the first gallery to present the art of Southeast Asia in New England. Through its triple-win philosophy of promoting South Asian Artists by helping them showcase their art on a global platform, helping art collectors enjoy and own art they like, and bettering lives by donating the proceeds to various charity initiatives, SAAG cares about the people involved in art as much as it cares for art. And this way it strives to positively impact society.  For more information visit www.southasianart.gallery or contact info@southasianart.gallery