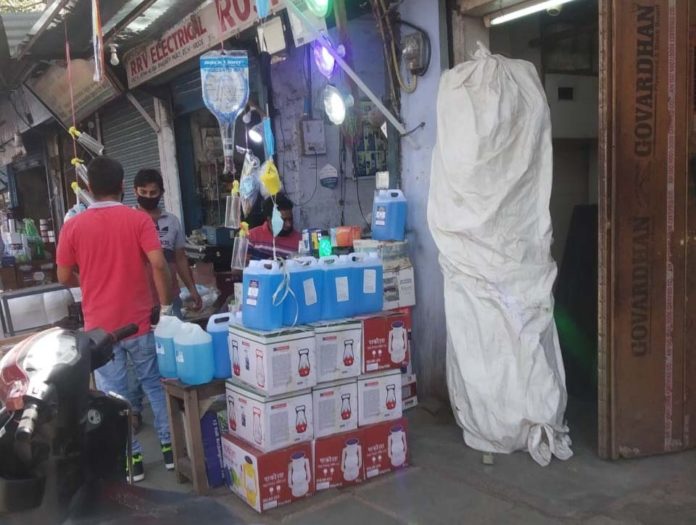 Atul Kumar Nasa, head of the Drug Control Department, said about the action being taken that “The team has been sent by the department to Bhagirath Palace to raid the shops selling inferior hand sanitisers. This team of drug control department is raiding shops selling substandard products here,” he said.

“Samples have also been collected from many shops here to know the quality of sanitisers,” he said.

In Bhagirath Palace, sanitisers of unnamed and dubious firms are available in five-litre cans at many shops. On asking shopkeepers about the price of these, IANS found that a five-litre can of sanitiser is available for just Rs 400. One such shopkeeper giving his name as A.K. Jain, said, “We are selling 5 litre cans of hand sanitiser for Rs 400. When taken in bulk, we are selling for Rs 350 for 5 litres.”

Blue-coloured sanitiser filled in white boxes is available at many shops here. No information about manufacturer address, batch number, licence or formula is given on many of these sanitiser-filled cartons.

Many shopkeepers have cleverly placed such sanitisers in stalls or on the streets right outside the shops instead of keeping them inside their shops.

When asked about the sanitiser manufacturing company and the quality, a shopkeeper named Sanjay Sharma said, “This is a locally made hand sanitiser. It is made in factories in and around Delhi. However, we do not know about its quality and its effectiveness against coronavirus.”

Many shopkeepers are selling hand sanitiser in bulk for only Rs 60 per litre.

“This information has now come to our notice. We are taking immediate action on it. The concerned authorities have been asked to investigate such shops and products,” Nasa said. (IANS)