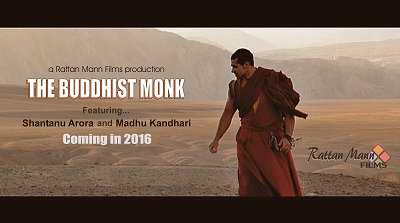 New Delhi–They say that age is no barrier to achieving one’s dreams. Indian mathematician, physicist and writer Rattan Mann, 71, has proven the adage by directing a film titled “The Buddhist Monk”, the script of which he wrote almost four decades ago.

Mann, who is based in Oslo, Norway, since the 1980s where he taught at a school, has written several short stories and three books, including the novel “The Prime Minister”, and his autobiography “Silence with the Storm”.

Driven by his interest in filmmaking, Mann has given shape to his 40-year-old dream to share a forgotten part of India’s history with the world with his movie.

“The Buddhist Monk”, which is set in pre-independence India, is based on the story of a secret group known as the ‘Pandits’, which was created by the British. Their objective was to carry out secret missions to gather information, influence people and, in this case, steal.

But why the name “The Buddhist Monk”?

“I have always been interested in many things, including Buddhism. In 1968, when I was a young man in my 20s, I did some deep study of Buddhism at the Delhi University library. There I came across a book in which I found that during the British Raj, a clerk from Kolkata was sent to Dalai Lama’s Potala Palace in Tibet to steal some secret scriptures,” Mann told IANS in a free-wheeling conversation here.

“No date was given, but this intrigued me, and it remained stuck in my mind. After about 10 years, I wrote the script for a possible film in 1978. After that I tried (to make a film), but it is very hard for newcomers to do anything. Now after the help and push of my own family, I (finally) made it. I directed it and also wrote the dialogues,” he added.

According to Mann, there are “very good things in our history which are not explored by the film industry”.

“We sometimes look to Hollywood for inspiration. These Pandits were committing thefts, influencing people… not much may be known about them anyway. They were a well-guarded secret and the British didn’t want to talk about it,” he added.

Mann, who has no links to the film industry, chose a fresh cast, including Delhi theatre artistes Madhu Kandhari and Shantanu Arora.

Despite the angle of theft in the story, Mann wanted to focus on the theme of love.

“Bollywood or Hollywood would make it as a theft thriller, but I believe in love. I gave it more of a human angle. The protagonist is an educated person, with a knowledge of Buddhism, living in a village with a sick wife (Madhu).

“He is without a job and his doctor advises him to go to town, where he can find a job and she can be treated. They leave their village and come to town with all their struggles and bad experiences,” Mann said.

With the film set to release online on Amazon.com on August 12, Mann feels that digital medium is the future for independent filmmakers.

“In India, what is needed is a change in mentality… Though it definitely is coming, the pace is a little slow. Once people start accepting that there is no such stuff as art or commercial films, then people like us have a greater chance, but that is up to the audiences,” he said. (IANS)