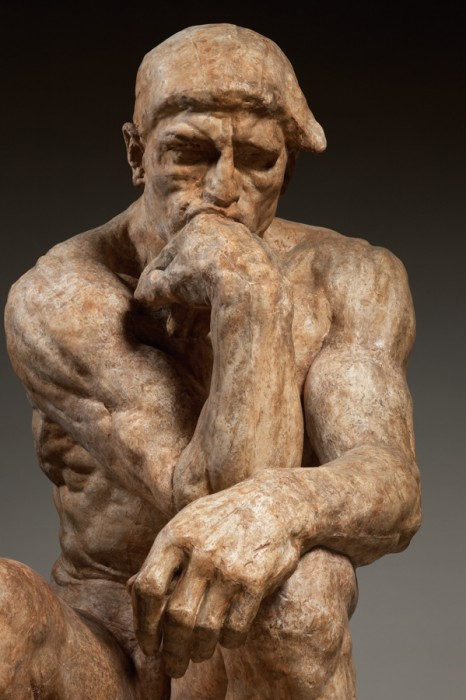 SALEM, MA – The Peabody Essex Museum (PEM) presents Rodin: Transforming Sculpture, an exhibition that fundamentally alters how we understand, interpret and experience one of the world’s most iconic sculptors. By shedding light on Rodin’s vivid imagination and experimental creative process, this exhibition underscores the truly avant-garde nature of Rodin’s sculpture and how his practice forever changed the course of art history.

Organized by the Montreal Museum of Fine Arts in collaboration with the Musée Rodin, Paris, Rodin: Transforming Sculpture features 175 works — including bronzes, marbles, plasters and stoneware — and is on view at PEM May 14 through September 5, 2016.

Whether working in plaster, marble or bronze, on an intimate or monumental scale, French artist Auguste Rodin (1840-1917) captured the emotional and psychological complexities of the human experience in ways that few sculptors have achieved, before or since. This exhibition presents Rodin’s most iconic sculptures, including The Thinker, The Kiss and The Hand of God, alongside both finished and process works that provide rich context and offer insight into the artist’s studio practice. Through his exploration of fragmentation, assembly and recombination, Rodin revelled in the creative process, embracing evolution and transformation as guiding principles.

“To Rodin, no sculpture was ever finished. His relentless experimentation with form, scale and composition reveal a searching, probing, problem-solving mind. With each recombination of sculptural elements — a head nestled in a chest, a delicately carved foot atop a pedestal — Rodin sought new ways to capture form and express the nuances of the human experience,” says Lynda Roscoe Hartigan, PEM’s James B. and Mary Lou Hawkes Chief Curator and the exhibition’s coordinating curator.

Nathalie Bondil, co-curator of the exhibition, Director and chief curator of the Montreal Museum of Fine Arts said, “With almost 100 rare studio plasters many of them never lent, in America,  numerous ancient bronzes and superb marbles, this exhibition reveals Rodin’s constantly evolving creative process and explores an aspect of his work that is less well known, that of his huge studio. Although we often imagine the master working in solitude, he is shown here for the first time in the context of his many expert collaborators. After the presentation of Rodin in Montreal and Richmond, we are pleased to collaborate on the exhibition’s New England premiere with the Peabody Essex Museum.”

Regarded as a pioneer of modern sculpture, Rodin gained recognition and acclaim in the 19th and early 20th century for his public monument commissions, portrait busts and poetic sculptural works. In the tradition of medieval and Renaissance masters, his prodigious creative output was aided, at times, by more than 50 studio assistants, including: live models, clay beaters, plaster and bronze casters, stone carvers, pointers and photographers. Rodin, part artist and part entrepreneur, supervised this large ensemble as they translated his clay and plaster models into marble and bronze sculptures.

The studio was Rodin’s workplace, exhibition space and salon. It was where he collected his ideas, housed his works and welcomed visitors. Models, men and women of all ages, recruited widely and met sometimes by chance, played an essential role in his work. Rodin endlessly sketched his models from all angles, as to capture every contour. He searched for the most expressive gestures of the human form and for emotions found within physical movement and repose. 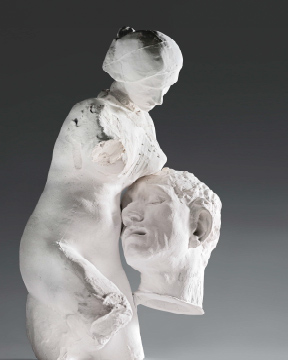 Noting he was happiest when “wallowing” in his compositions, Rodin endlessly reinvented his forms through experimental practices and manipulation of scale. A wide array of plaster-cast heads, hands, feet, arms and legs made up a stockpile of “spare parts” in the studio and fueled his studies of form and composition. Through the mixing, recycling and grafting of plaster fragments, Rodin gave these basic forms fresh symbolic meaning with each new combination. By exploring assemblage, the innovative process of combining and reconfiguring entire sculptures or fragments of works with other ready-made pieces, Rodin pushed his work in fertile directions that reconceived sculpture as always in transition.

Rodin’s studio assistant, Viktor Frisch, described the artist’s vast collection of cast forms: “He had several plaster casts made. One was kept intact, the others were cut apart, and the sections numbered and catalogued, so that they might be drawn out of their cupboards to serve in other figures, perhaps years later. Thus dissected, limb from torso, they would be set, again and again, in new arrangements and further thoughtful groupings.”

In recent decades, historians have turned their attention to Rodin’s plaster casts which convey the most faithful record of the initial clay work, which is most often lost.  Rodin placed plaster at the center of his creative process, making way for chance, intuition, experimentation and study, in keeping with an unprecedented principle of continuous creation. Many works in the exhibition reveal how often Rodin re-imagined plaster elements of his iconic work, The Gates of Hell, which is at once a remarkable synthesis of his ideas as well as a wellspring for individual sculptures.

For the strange and touching, Assemblage (seen above), Rodin attached a small head from his model Woman with a Chignon to a female torso whose breasts he had reworked with a chisel before adding the disproportionately large head of Pierre de Wissant, one of the six men portrayed in his major public monument commission, The Burghers of Calais. Rodin deliberately altered their scale to accentuate the expression of a gesture and enhance the work’s emotional impact. 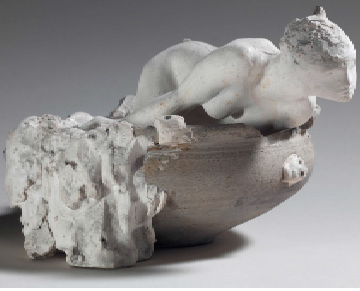 Rodin worshipped Greco-Roman statuary, which he thought to be inspired by nature — and therefore by life itself. He avidly assembled a collection of more than 6,000 antiquities, including fragments of Egyptian, Greek, Hellenistic, Etruscan and Roman works in marble or bronze, as well as vessels and other figurines in terracotta or stone.

Mixing an allusion to antiquity with modernity, beginning in the 1890s Rodin created a series of works that couple female figures with ancient vessels of diverse shape and origin. He called these small bodies emerging from their ancient pots “flowers” and these mini-assemblages demonstrate the artist’s commitment to improvisation. Many of these works, which have never been previously viewed outside of the Musée Rodin, speak to the artist’s quest to renew the language of sculpture through a reverence of the past coupled with a desire to break from it.

In Assemblage (Female Figure and Wave in a Pottery Vessel) (seen above) from 1903, a graceful body leans forward, as if trying to escape from the simple earthenware bowl. A few additional strokes of contrastingly rough plaster suggest water overflowing the edge of the vessel, as well as the artist’s act of fusion in progress. The allusions to antiquity embodied in these composite works do not detract from their modernity — rather, these delightful and idiosyncratic assemblages demonstrate completely new effects of scale, fragmentation, surface texture and color.

Beginning in 1894, Rodin employed the services of “reproductive sculptor” Henri Lebossé to translate his clay and plaster figures into different scales. The Thinker, originally conceived at one-third life-size as the crowning figure on The Gates of Hell, was unveiled in Paris at the Salon of 1904 in its new colossal size. The sculpture caused a sensation, provoking jeers — “a wild orangutan, a huge brute, a bloated boxer” — from some, and praise — “a new Hercules, a peasant philosopher” — from others. Today, this image of a man in a state of profound meditation, whose powerful body nonetheless suggests a great capacity for action, is one of the world’s most celebrated sculptures.

The Burghers of Vancouver

Rodin’s monumental influence lives on in a contemporary video installation by Canadian artists Adad Hannah and Denys Arcand. The Burghers of Vancouver explores the idea of the urban monument by taking apart and putting back together the sculpted group using actors, each of whom take the pose of one of the six figures that make up Rodin’s iconic work, The Burghers of Calais. An anonymous poet, an old lady, a smuggler, an athlete, a laid-off worker and a former junky meet every day, dress up as actors, pose for the whole day in front of the Vancouver Art Gallery and then go home at the end of the day. As the video unfurls, we see the physical demands and social marginalization that unifies these individuals.

Originally titled Metamorphosis: In Rodin’s Studio, the exhibition is organized by the Montreal Museum of Fine Arts, in collaboration with the Musée Rodin, Paris. The exhibition is curated by Nathalie Bondil, Director and Chief curator of the Montreal Museum of Fine Arts, with the assistance of Sylvain Cordier, Associate Curator and Curator of early decorative arts, and under the direction of Catherine Chevillot, Head Curator and Director of the Musée Rodin, by Sophie Biass-Fabiani, Curator of the Graphic Arts and Painting. The exhibition design is adapted from Nathalie Crinière of Agence NC, Paris and Sandra Gagné, Head of Exhibitions Production at the MMFA.

The AMG Foundation sponsored the exhibition at the Peabody Essex Museum. Carolyn and Peter S. Lynch and The Lynch Foundation provided generous support. The East India Marine Associates of the Peabody Essex Museum also provided support. The exhibition catalogue, with contributions on Rodin’s process by leading scholars, is published by the Montreal Museum of Fine Arts.