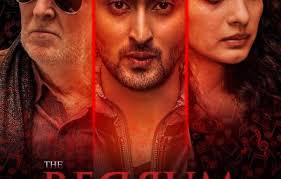 This film is adapted from American author Edgar Allan Poe’s classic short story — “The Tell-Tale Heart”. It is a story where the narrator endeavours to convince the audience of his sanity while simultaneously describing a murder he committed.

“Redrum” which reads murder in reverse, unlike the classic is a sloppy representation of the tale.

Set in Delhi, the narrative begins with Aarika getting smitten by a much sought-after pub Singer Daksh Sikka (Vibhav Roy). They bond after his performance, over drinks. And while their romance blossoms, Daksh who is addicted to drugs is haunted by his past. So oscillating between hallucination and bitter memories, he turns violent. This sours his relationship with his girlfriend and she tries evading him.

Meanwhile Eric Fernandes, the Head of Narcotics Department is hot on Daksh’s heels. He wants Daksh to become an approver to enable him to arrest some affluent drug peddlers. Soon Eric chances upon Aarika and seeks her help to convince Daksh.

While the tale is interesting, the writing is lethargic and mediocre. It lacks pace and energy. The narrative drags while it meanders sketchily to establish the romance juxtaposed by Daksh’s childhood history. The plot skims through Daksh’s life and ends up being a half-baked attempt. The characters are flat and cardboard thin. Thus, the essence of a thriller or a horror drama is lost.

While the dialogues are colloquial and ordinary, Eric Fernandes quoting Anand Bakshi seems laboured and forced.

On the performance front, Vibhav Roy is sincere but fails to make an impression. The Pakistani actress Saeeda Imtiaz as Aarika and Neha Kargeti as Aarika’s friend Chavi are equally competent.

This is probably, one of Tom Alter’s last films and he definitely seems to be a miscast as Eric Fernandes, who seems to be designed after ACP Pradyuman, from the long standing Television show “CID”.

The songs, “Teri kami” and “Imtihaan” mesh seamlessly into the narrative but the background score is a bit jarring to the ears.

Mounted on a moderate scale, directors Dhruv Sachdev and Sourabh Bali, fail to do justice to a subject which had the potential of becoming an interesting film. Instead, it seems like a rehash of many skewed love stories.