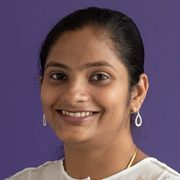 Taking inspiration from bats, which use sonar to navigate in the dark by sending out acoustic signals and using the reflections to identify objects, Nandakumar has created technology that turns an ordinary smartphone into an active sonar system capable of detecting physiological activities, such as movement and respiration, without requiring physical contact with the device. Her system works by transmitting inaudible sound signals from the phone’s speaker and tracking their reflections off the human body. The reflections are then analyzed using a combination of algorithms and signal processing techniques.

“I always wanted to find a way to detect physiological signals, like breathing and heart rate, because they are the most commonly used signals for healthcare applications,” said Nandakumar. “I noticed that many consumer electronics devices have speakers and microphones and decided to see if inaudible signals could help detect physiological movement.”

Nandakumar used her system to disrupt the sleep industry by creating a non-intrusive, low-cost application called ApneaApp for detecting sleep apnea, a breathing disorder affecting 1 in 13 Americans that often goes undiagnosed. Before ApneaApp, diagnosing sleep apnea required an expensive polysomnography test that involved an overnight stay in a hospital or sleep clinic connected to a tangle of wires, or in-home systems with high failure rates due to the accidental detachment of sensors during sleep. ApneaApp, on the other hand, requires no instrumentation of the individual and can track a person’s breathing in a contactless manner from the comfort of their own bedroom. Having proven the effectiveness of the technology, Nandakumar and the University of Washington licensed the technology to ResMed, a global leader in sleep technology and medical devices. The technology was built into the new SleepScore app for Android and iPhone that helps individuals to monitor their sleep quality.

“Rajalakshmi has a knack for selecting problems with high social impact,” says Dr. Shyam Gollakota, an associate professor at the Allen School and Nandakumar’s advisor. “What’s incredible is that she has developed technology that seems like science fiction and has gotten it adopted by hundreds of thousands of people in the real world. It is rare for a graduate student to have such impact with even one application, and she is doing it time and again.”

Nandakumar’s latest work focuses on using sonar to detect opioid overdoses. Roughly 100 people die each day in the US after overdosing on opioids, making it one of our most critical healthcare issues. But deaths from overdose are preventable through timely detection and intervention. Nandakumar developed an app that people can download prior to engaging in high-risk behavior that monitors breathing and other movements and automatically alerts emergency services or other help if these activities cease. The application has been tested at a clinic in Vancouver, BC and shows promise for saving many lives.

“My father was in the healthcare industry when I grew up and I spent a lot of time in these environments,” explains Nandakumar. “The best part of my work is seeing real people using my technology and knowing that it benefits their well-being. As a computer scientist, I find that very fulfilling.”

A native of India, Nandakumar received her Bachelor’s degree in Computer Science and Engineering from the College of Engineering in Guindy, India. She worked for Microsoft Research India for two years before beginning her graduate work at the University of Washington in 2013.

“Our Young Scholar award attracts the world’s brightest young communications researchers,” says Dr. Vinton Cerf, Chairman of the Marconi Society. “Rajalakshmi embodies every characteristic that we seek – unparalleled intellectual capability, entrepreneurial spirit and the vision to use her work to better humankind.”

“Marconi was the pioneer of wireless communications,” says Nandakumar. “Being recognized by the Marconi Society is humbling and motivates me to excel even further in this field and to have a much larger impact.”

Young Scholar candidates are nominated by their academic advisors. Winners are selected by an international panel comprised of engineers from leading universities and companies and receive a $5000 prize plus expenses to attend the annual awards event. Three other Young Scholars were also selected this year.

All will receive their awards October 2nd in Bologna, Italy, at the same event where Akamai Co-founder F. Thomson Leighton, a key contributor to the development of content delivery networks, will be honored with the $100,000 Marconi Prize.

Established in 1974 by the daughter of Guglielmo Marconi, the Nobel Laureate who invented radio, the Marconi Society promotes awareness of key technology and policy issues in telecommunications and the Internet and recognizes significant individual achievements through the Marconi Prize and Young Scholar Awards.