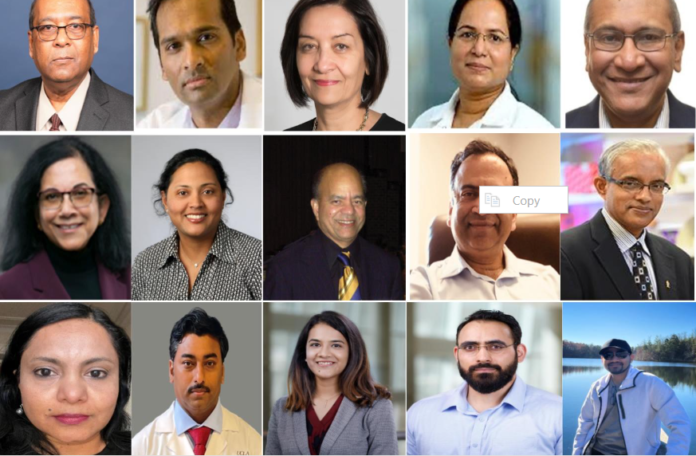 Dr. Aniruddha Ganguly, Founder and current President addressed the AAISCR community by emphasizing the importance of supporting the community of Indian American cancer researchers for the last 29 years with integrity, loyalty and generosity. Most of the AAISCR members developed friendship and research collaborations through AAISCR. This organization best serves by connecting scientists of similar interest to help them develop network, pursue common goals, share knowledge and expertise, provide information on cancer education and training, mentoring scientists at different career levels, provide scholarships for scientific meeting travel, training, and seed funds for developing new projects, recognize outstanding scientific achievements through a variety of award mechanisms, and provide opportunity to get current information on funding and training offered by the National Institutes of Health.

This year AAISCR Lifetime Achievement Awards were presented to two renowned scientists who have made significant fundamental contributions to cancer research including treatment, either through a single scientific discovery or a body of research work and have had a lasting impact on cancer research and demonstrated a lifetime commitment to the progress against cancer.

The keynote speaker and lifetime achievement awardee Dr. Arul Chinnaiyan is S.P. Hicks Endowed Professor of Pathology, Director, Michigan Center for Translational Pathology, investigator, Howard Hughes Medical Institute, American Cancer Society Research Professor and Professor of Urology at the University of Michigan. Dr. Chinnaiyan is elected member of the American Academy of Arts and Sciences, the Institute of Medicine of the National Academy of Sciences, the Association of American Physicians and the American Society for Clinical Investigation. Dr. Chinnaiyan is best known for the discovery of TMPRSS2-ETS gene fusions in prostate cancers, the first causative gene fusion in a common solid tumor. These gene fusions are specific markers of prostate cancer. This discovery was made using a bioinformatics approach to detect outlier genes in an aggregated tumor gene expression database called ONCOMINE, developed by his group.

The lifetime achievement awardee Dr. Nina Bharadwaj holds the Ward-Coleman chair in cancer research and is a professor of medicine, hematology, and oncology at the Icahn School of Medicine at Mount Sinai, and Director of

Immunotherapy, Medical Director of the Vaccine and Cell Therapy Laboratory, and Co-Director of the Cancer Immunology Program at The Tisch Cancer Institute, NY. Dr. Bhardwaj has made seminal contributions to human dendritic cell biology, specifically with respect to their isolation, subset discovery, immunobiology, antigen presenting function, and use of vaccine adjuvants in humans. She developed Toll Like Receptor agonist and dendritic cell-based vaccines for the treatment of both cancer and infection and has pioneered neoantigen vaccine studies. She was named one of the Scientific American’s Top 50 Researchers, receiving the Award for Medical Research in 2004. She has been an elected member of the American Association of Physicians and Frederick W. Alt Award for New Discoveries in Immunology.

AAISCR Outstanding Scientist Award recognizes novel, and significant biomedical research which has led to important contributions in basic and translational cancer research, cancer diagnosis, prevention, or treatment of cancer patients. The following two scientists were recipients of this award.

Dr. Thirumala-Devi Kanneganti received Outstanding Scientist award who is Member, St. Jude Faculty Vice-Chair of the Immunology Department, Rose Marie Thomas Endowed Chair at the Comprehensive Cancer Center at the St. Jude Children’s Research Hospital, TN. Dr. Kanneganti’s research is directed to understanding how the innate immune system recognizes and responds to pathogens and how genetic mutations in innate immunity affect the development of infectious, inflammatory, and autoimmune diseases in humans. Her studies have contributed to both the inception and the maturation of the inflammasome field as a major research area in immunology and as a site for therapeutic innovation.

Outstanding Scientist award recipient Dr. Anindya Dutta is Professor and Chairman of the Department of Genetics, University of Alabama at Birmingham. His research interests cover genomic instability in cancer cells and noncoding RNAs in differentiation and cancer. His laboratory identified many of the replication initiation proteins in human cells, used genomics technology to identify hundreds of origins of replication in human chromosomes, discovered a major mechanism by which human cells prevent over-replication of their DNA, and identified a novel class of circular DNA present in normal mammalian cells. Dr. Dutta has also discovered many microRNAs that inhibit cell proliferation and promote differentiation during the conversion of muscle stem cells to mature muscle and microRNAs that contribute to the phenotypes of advanced prostate cancer.

This year AAISCR introduced two new awards in specific areas to encourage scientists to define their career paths. The following scientists were awarded in specific categories.

hardship. Dr. Mahajan has been developing drug therapy for osteosarcoma using cellular and animal models and efficacious drug delivery methods to reduce drug dosage and resultant toxicity while investigating molecular mechanism of action of the drugs that are successful in inducing apoptosis in metastatic osteosarcoma.

A major focus of AAISCR has been to recognize and promote next generation of young investigators who have demonstrated excellence in cancer research. Young investigator awards were presented in three different categories, junior faculty, postdoctoral fellow and graduate student, to encourage their research activities in cancer-related biomedical research. This year Young Investigator Awards were presented to the following bright young scientists for their outstanding achievement in cancer research.

The annual meeting presented an opportunity to discuss grant-related questions and NIH funding opportunities in molecular analysis technologies for cancer research with Dr. Tony Dickherber, program director of the National Cancer Institute. This program was highly appreciated by the AAISCR community.