Narain is a writer and environmentalist. In 2016 she was named one of Time Magazine’s 100 most influential people. In 2005 she was awarded the Padma Shri (a top civilian state prize) by the Indian government. She also chaired the Tiger Task Force at the direction of the Prime Minister, to evolve an action plan for conservation in the country after the loss of tigers in Sariska.

Narain has received the World Water Prize for work on rainwater harvesting and for its influence in building paradigms for community-based water management. She was a member of the Prime Minister’s Council for Climate Change and the National Ganga River Basin Authority. She has been with the Centre for Science and Environment (CSE) in New Delhi since 1982. She is currently director general of the Centre, treasurer of the Society for Environmental Communications, and editor of the fortnightly magazine, Down To Earth. 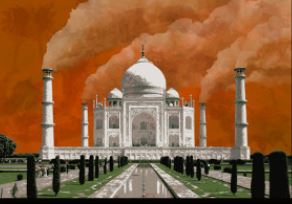 Here are the details about the event:

This is what panelists would address: “ The Indian environmental stories that are making international headlines are the ghastly air pollution and the nation’s inability to control filth, garbage and sewage that are overwhelming its cities, rivers and fields. The other narrative linking India to the rest of the world is that India is the major villain in climate change. I ask, can India can beat the pollution game by following the trajectory of the western world? Won’t capital and resource-intensive methods of environmental management simply add to the burden of inequality, and so to unsustainability? Also, is India the villain or the victim in international climate politics? Are there lessons in India for the global community in its fight against climate change? I will discuss how democracy and dissent must work together so that the environmentalism of the poor dictates the politics of change. Not just change in India, but change in the world.”