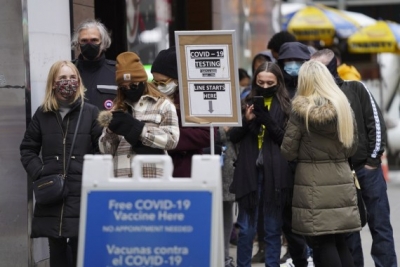 Washington– Omicron has become the dominant Covid-19 variant in the US, accounting for over 73 per cent of new weekly cases, according to the Centers for Disease Control and Prevention’s (CDC) latest estimates.

In the week ending December 4, Omicron only accounted for 0.7 per cent of all the cases.

The Omicron variant is spreading rapidly nationwide and has been found in at least 48 states till date, since the first case in the country was detected in California on December 1.

The unprecedented infectiousness of the Omicron variant and its possible ability to evade the immune system have stoked concerns across the nation. However, experts said preliminary data suggest the new variant appear to cause less severe symptoms and hospitalisations.

Covid-19 cases, deaths and hospitalisations have continued to surge in the US, leading to the cancellation of large events including sports games and live concerts. Some colleges have shifted back to online classes and exams for the rest of the semester to make students go back home earlier.

The country is averaging about 130,000 new cases daily, a 10 per cent increase from the previous week, according to the CDC estimates.

Currently, the US is witnessing about 7,800 new hospital admissions each day, a 4.4 per cent increase from the previous week, the data showed

However, the surge in new infection cases did not deter people from flying for holidays. The US Transportation Security Administration (TSA) has screened over two million passengers for a fourth day in a row.

The TSA expected up to 21 million Americans will fly between Thursday and January 3, 2022.

Experts warned the US is moving toward Christmas in dramatically different shape than it was before Thanksgiving.

The two tallies are the highest in the world, making the US the worst-hit country by the global heath crisis. (IANS)