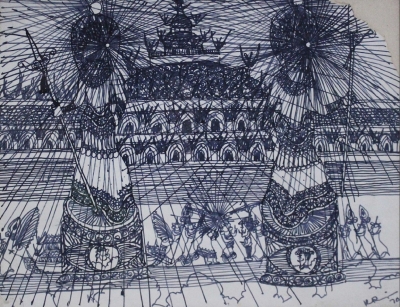 New Delhi– The Kiran Nadar Museum of Art (KNMA) in the national capital is reopening its museum for visitors after a yearlong pause on holding onsite exhibitions due to the Covid-19 pandemic.

The space will witness two exhibitions — ‘K Ramanujam: Into the Moonlight Parade’ and ‘Atul Dodiya: Walking with the Waves’ — curated by Roobina Karode. The preview will be held on March 22.

The two artists are spaced by distinct junctures in Indian art, and yet connected through underlying chords of hope and resilience.

Paying homage to Ramanujam, an exceptional figure of Indian modernism, the exhibition ‘K Ramanujam: Into the Moonlight Parade’ provides the audience with a unique opportunity to view rare drawings and paintings of the artist, including his awe-inspiring 13-feet panorama ‘My Dream World’ (1973).

‘Atul Dodiya: Walking with the Waves’ will showcase the recent works of Atul Dodiya generated from the pandemic situation. It will open parallel to Ramanujam’s show at KNMA, Saket.

The exhibition will look at a body of intimate and small-format watercolours produced by Dodiya during the past two years. As the world shut down in response to the pandemic, the artist also had to retreat to his inner world, his sanctuary.

With a fund of time at hand while quarantined at home, Dodiya began his exploration of the world outside, one which is rooted in the real, yet silently allowing the fantastic to enter the image-scape. So far, what had only been subjects of routine observances turned into remote recesses. What he had not realised was the power of the subconscious to dredge up, from the depths of the mind, extemporaneous views of trees, creepers, plants, sky, clouds, water bodies and waves of imagination.

Familiar sights from his morning walks transformed into magical landscapes with faceless mystic figures engaged in otherworldly gesticulations, and the pervasive city disappearing from the configurations.

Eventually, as the simple act of daily morning walks became precarious, these watercolours on his pad became repose for the recluse. Conversing through impeccable silence, the painted characters are relatable now and unreachable in the next moment.

The two exhibitions together will reveal intricacies and profundities that solitary creative minds can reach and bring out for the onlooker, by touching upon unforeseen emotions and sensibilities that can only arise from a period of great crisis and a subsequent respire brought in through healing. (IANS)