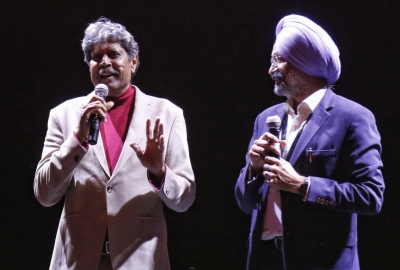 Manesar– Former India skipper Kapil Dev on Thursday said he has no regret that there is no video footage available of his unbeaten 175-run innings against Zimbabwe during the 1983 World Cup.

The win in the ’83 World Cup remains one of the greatest sporting achievements in Indian history. Scripting that victory would not have been possible if the then Team India skipper Kapil didn’t come up with an epic knock at the Tunbridge Wells ground against Zimbabwe on June 18, 1983.

But unfortunately for the Indian cricket fans, Kapil’s innings was never recorded on camera because of a nation-wide strike by sole broadcasters BBC back then.

After India were reduced to 9/4 by Zimbabwe, Kapil then played some remarkable cricket to guide his side to a respectable total of 266/8 in 60 overs. India won the game by 31 runs.

“I don’t like to criticise people. People say don’t you feel bad it wasn’t recorded, and I always say ‘no’ because it is recorded in my head,” Dev said at an event organised by telecom operator Airtel to demonstrate some of its 5G-led immersive user experiences at its Network Experience Center in Manesar, Haryana.

At the event, the telecom operator demonstrated an immersive and India’s first 5G-powered hologram of the former India cricketer and recreated the in-stadia experience of the cricketer’s unbeaten innings against Zimbabwe.

Also, the Haryana Hurricane’s signature Natraj shot was shown in such a manner that a person can experience the moment at a 180-degree view.

Asked if that particular innings was his finest performance, the legend refuted by saying that it was, however, an “important” innings. (IANS)