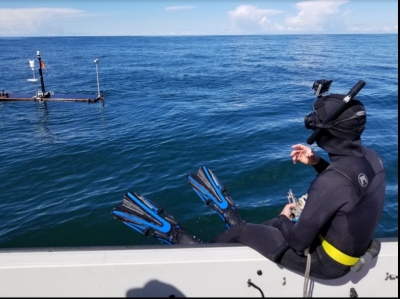 Washington– After being delayed over a year due to the pandemic, NASA has launched a mission with scientific instruments aboard a self-propelled ocean glider and several airplanes to study the role of small-scale whirlpools and ocean currents in climate change.

The Sub-Mesoscale Ocean Dynamics Experiment (S-MODE) mission will deploy its suite of water- and air-borne instruments to show what’s happening just below the ocean’s surface.

The S-MODE team hopes to learn more about small-scale movements of ocean water such as eddies. These whirlpools span about 6.2 miles or 10 kilometres, slowly moving ocean water in a swirling pattern.

“This campaign in May is largely to compare different ways of measuring ocean surface currents so that we can have confidence in those measurements when we get to the pilot in October,” said Tom Farrar, Associate Scientist at the Woods Hole Oceanographic Institution in Massachusetts and principal investigator for S-MODE.

The full-fledged field campaign will begin in October 2021.

The team is using a self-propelled commercial Wave Glider decked out with scientific instruments that can study the ocean from its surface. The most important gadgets aboard are the acoustic Doppler current profilers, which use sonar to measure water speed and gather information about how fast the currents and eddies are moving, and in which direction.

The new data will allow the scientists to estimate the exchange of heat and gases between Earth’s atmosphere and the ocean, and consequently better understand global climate change.

While the Wave Glider continues its slow trek across the ocean’s surface, several airplanes will fly overhead to collect data from a different vantage.

The October deployments will also use NASA’s Langley Research Center Gulfstream III plane with JPLa¿s Portable Remote Imaging SpectroMeter (PRISM) — an instrument to measure phytoplankton and other biological material in the water — a large ship and some autonomous sailing vessels, called Saildrones, in addition to planes and Wave Gliders. (IANS)