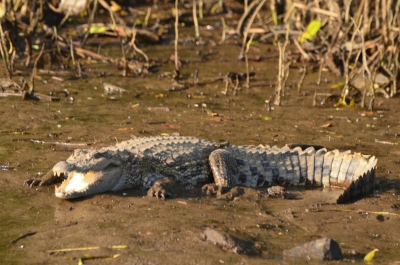 Canberra– A new extinct crocodile species dating back to millions of years ago has been discovered in the sparesely-populated Australian Outback.

A team from the Museum and Art Gallery of the Northern Territory (NT) on Monday announced that they have identified the new species belonging to the Baru genus but have not yet named it, reports Xinhua news agency.

Adam Yates, the senior earth science curator at the museum, said the best example of the crocodile’s skull was found north-east of Alice Springs in central Australia in 2009.

Based on the skull, which is 8 million years old, Yates said the Baru was comparable in size to a saltwater crocodile but significantly heavier.

“This particular specimen is one of the last of its kind. It is by far the nicest and most complete skull of a Baru crocodile that’s ever been found,” he told the Australian Broadcasting Corporation (ABC).

He said the crocodile probably weighed more than an equivalent length to a saltwater crocodile, or probably hundreds of kilos.

“Its really strongly built thick, heavy, deep jaws, and really massive teeth all indicate that this was a crocodile that was specialized in taking megafauna,” he said.

“(Modern crocodiles) subsist mostly on small fish and small prey. This guy didn’t subsist on small things. It was specialized for taking big things all the time.”

“The Australian crocodiles are actually recent arrivals on the Australian continent. They belong to the genus Crocodylus, which probably has an origin in Africa,” Yates said.

“Whereas Australia’s original endemic crocodiles like this one, have gone extinct completely.”

The name of the new species will be announced in 2022. (IANS)