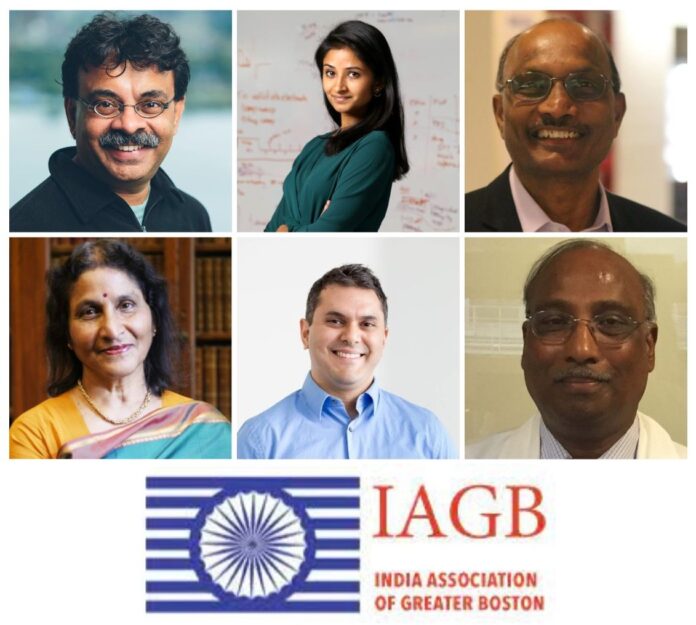 This year’s NECA award recipients are: Madhu Sudan, Gordon McKay Professor of Computer Sciences at John A. Paulson School of Engineering and Applied Sciences at Harvard University; Indira Viswanathan Peterson, a leading scholar of Sanskrit, Tamil literature and South Indian cultural history and performing arts; Aman Narang, President and Co-Founder of Toast Inc., which empowers restaurants of all sizes and has a market cap of $11 billion; Seshi Sompuram, President of Shishu Bharati, which teaches Indian languages and culture to about 900 students each year; Dr. Nagagopal Venna, MD, Chief of the Division of Neuro-Immunology and Neuro-Infectious Diseases, Massachusetts General Hospital; Shriya Srinivasan, a MIT Postdoctoral Researcher, Incoming Assistant Professor at Harvard University, Forbes 30 Under 30 and a Biomedical Engineer; and India Association of Greater Boston (IAGB), one of the oldest non-profit community organizations in the United States.

These luminaries and shining stars will be honored at a black-tie gala at the Hilton Woburn Hotel in Woburn. The annual gala, which is presented by the INE MultiMedia in collaboration with the INDIA New England News, will also honor biopharmaceutical leader, entrepreneur, medical educator and Visterra CEO Dr. Brian Pereira with the 2022 Lifetime Achievement Award.

INE received over 200 nominations for these awards. A jury of 13 individuals selected the final winners.

“It is a true privilege for us at New England Choice Awards to honor our extraordinary recipients for their immense contribution to their work and community,” said Dr. Manju Sheth, MD, creator of NECA Awards and CEO of INE MultiMedia, a Waltham, MA-based (501c-3) non-profit organization devoted to promoting and supporting charitable organizations, art, culture, education and empowerment. “My congratulations to all the recipients. We look forward to welcoming everyone at the Gala on Saturday, November 19, 2022.”

Upendra Mishra, publisher of INDIA New England News, IndUS Business Journal, Boston Real Estate Times and Life Sciences Times, said that this year’s honorees are not only super achievers in their own right but their work has tremendous impact on business, technology, community and people’s daily lives.

“It will be exciting to be in the company of such luminaries at the New England Choice Award gala on November 19 at Hilton Woburn,” said Mr. Mishra. “We are also grateful to all those who sent about 200 nominations this year’s NECA awards.”

Prof. Sudan is best known for his works on probabilistic checking of proofs, and on the design of list-decoding algorithms for error-correcting codes.  His current research interests include property testing which is the study of sublinear time algorithms to estimate properties of massive data, and communication amid uncertainty, a mathematical study of the role of context in communication.

He is a recipient of the Nevanlinna Prize awarded by the International Mathematical Union for outstanding contributions to mathematics of computer and information science, and the Infosys Foundation Prize in Mathematical Sciences, and the IEEE Hamming Medal. He is a fellow of the Association for Computing Machinery,  the Institute of Electrical and Electronics Engineers and the American Mathematical Society.  He is a member of the American Academy of Arts and Sciences and the National Academy of Sciences. He is author of two books: “Efficient Checking of Polynomials and Proofs and the Hardness of Approximation Problems” and “Complexity Classifications of Boolean Constraint Satisfaction Problems.”

Prof. Peterson is a leading scholar of Sanskrit and Tamil literature and Hinduism, and South Indian literary, social and cultural history and performing arts, especially Karnatak music and early modern dance drama. Prior to being named Professor Emeritus of Asian Studies at Mount Holyoke College, she held the David B. Truman Chair at Mount Holyoke, and has been Professor of Sanskrit at Columbia University, and Fortieth Anniversary Professor in the Five College Consortium of Western Massachusetts.

Prof. Peterson has a B.A. (honors) in English Literature from Bombay University, and A.M. and Ph.D. degrees in Sanskrit and Indian Studies from Harvard University.  She has held a number of research fellowships, including fellowships from the Guggenheim Foundation, the American Council of Learned Societies, the National Endowment for the Humanities, The American Institute for Indian Studies, the Social Science Research Council, the Alexander von Humboldt Foundation, and the Rockefeller Foundation.

Her interests include translation, European-Indian culture contact, and comparative literature. She has published widely on these subjects. Her major publications are: Poems to Śiva: The Hymns of the Tamil Saints (1989), Design and Rhetoric in a Sanskrit Court Epic: The Kirātārjunīya of Bhāravi (2003), and Arjuna and the Hunter, the first complete English translation of the Sanskrit literary epic Kirātārjunīya, in the Murty Classical Library of India, Harvard University Press (2016). Other publications include: George Michell and Indira Peterson, The Great Temple at Thanjavur: A Thousand Years. 1010 – 2010 (2010); Performing Pasts: Reinventing the Arts in modern South India, co-edited with Davesh Soneji (2008); and Tamil Geographies: Cultural Constructions of Space and Place in South India, co-edited with Martha Selby (2007). Dr. Peterson was the editor of Indian literature for The Norton Anthology of World Masterpieces (Expanded 6th Edition, 1995), and The Norton Anthology of World Literature (2001).

She is completing Tanjore Renaissance: King Serfoji II and South Indian Modernity, an intellectual and cultural biography of the royal polymath and innovator Serfoji II. Also in progress are the monographs Drama, the Court, and the Public in Early Modern India, and An Enlightenment Library in Nineteenth-century India: The Personal Collection of King Serfoji II of Tanjore (r.1798-1832).

Prior to Toast, Mr. Narang worked on innovation initiatives at Endeca, now Oracle. He spearheaded the development of Endeca’s business intelligence platform as well as their mobile commerce platform, each of which became major business units.

He holds BS and MS degrees in Computer Science from MIT and currently leads innovation and business development initiatives at Toast.

Mr. Sompuram has been president of Shishu Bharati for the last 11 consecutive years. He manages all day-to-day operations of the organization–everything from facilities to teachers, and from students to volunteers. Ay Shishu Bharati, children learn Indian languages and culture. Mr. Sompuram co-ordinates with a team of 200 student and adult volunteers and about 900 students each year. He has been doing this for the last 11 years.

Mr. Sompuram is an inventor with five patents and has co-authored numerous publications and textbooks. He has over three decades of expertise in molecular biology, antibody engineering, and phage-display technologies (both antibody and peptide phage display). During his Post-Doctoral training, he was involved in developing cancer therapeutic polyclonal phage antibodies, which were eventually commercialized.

Mr. Sompuram led the Boston Cell Standards team’s efforts in developing and applying these technologies in the area of cancer detection and diagnosis and serves as the company’s Clinical Study Monitor and Coordinator.

Chief of the Division of Neuro-Immunology and Neuro-Infectious Diseases, Massachusetts General Hospital

Dr. Venna is a distinguished neurologist in Boston and has just completed 20 years of service at the Massachusetts General Hospital, the flagship medical institution for Harvard Medical School and one of the best hospitals in the country. Prior to joining Massachusetts General Hospital, Dr. Venna was the director of Clinical Neurology in the Neurological Unit at Boston City Hospital for 18 years.

His appointment at the Massachusetts General Hospital comes with the recognition of his leading role in the rapidly expanding specialty field within neurology, which is dedicated to the diagnosis and treatment of patients affected by unusual autoimmune disorders of the brain, spinal cord and nerves.

His involvement in this rapidly changing and complex field of neurological complications and disabilities associated with HIV, started with some of the first cases of HIV-AIDS in the Boston area in the early 1980s while he was director of Clinical Neurology at the Neurological Unit of Boston City Hospital, which naturally lead to establishing the first HIV Neurology subspecialty clinic in association with an Infectious Diseases department at Massachusetts General Hospital 20 years ago. He taught and trained the over 20 Fellows of the infectious diseases in the neurological complications of variety of infections in addition to HIV.

Dr. Venna is an alum of Guntur Medical College in India, and did his post-graduate training and experience in Internal Medicine in Ireland leading to the Membership of the Royal Colleges of Physicians in Ireland and UK.

Shriya Srinivasan is a Schmidt Science Fellow and Junior Fellow at the Harvard Society of Fellows. Currently, Shriya is designing devices for gastrointestinal neuromodulation in the MIT Langer Lab in collaboration with Dr. Giovanni Traverso. In her spare time, she professionally dances Bharatanatyam, a south Indian classical dance form, and co-directs Anubhava Dance Company.

She earned a BS in biomedical engineering, with a concentration in biomaterials from the Case Western Reserve University. She received her doctoral degree in medical engineering and medical physics through the Harvard-MIT Health Sciences and Technology program in January 2020. Her doctoral research focused on the development of novel neural interfaces utilizing tissue engineering to better interface human limbs with prostheses, in the context of amputation and paralysis. She developed the Regenerative Agonist-antagonist Myoneural Interface (AMI) that will ultimately enable patients to control their prosthesis with native neural signals. She also explored optogenetic techniques to create novel strategies to accelerate and improve neural control.

She is a former director of MIT Hacking Medicine and works passionately on global health projects through her nonprofit organization, the Project Prana Foundation 501c3, which launched the iSAVE device in global markets in 2021.

Not for Profit Organization

The India Association of Greater Boston, popularly known as IAGB, has been one of the early organizations to have formed in New England. It has served the needs of the Indian diaspora for upwards of 60 years. Over the years, IAGB has provided various cultural, educational and civic platforms to the Indian community. The Republic Day and India Day celebrations have been signature events, invoking a gathering of about 20,000 people at its max.

Founded in 1962 as a socio-cultural organization, IAGB has played an important role in bringing the area’s Indian communities together. In its early years, IAGB played a major role in bringing the then small Indian community together to celebrate Indian festivals and special occasions. It must be noted that its annual India Day celebration in Boston has grown into one of the largest ethnic events in the City of Boston, drawing thousands of people of all ethnicities comprising not only Indian Americans, but also the national mainstream.

IAGB is governed by an Executive Committee consisting of professionals, who speak different languages, come from different backgrounds, and are a microcosm of the unity-in- diversity that is India. IAGB thrives because of the dedication and hard work of its volunteer officers and directors and the continued enthusiastic support from the Greater Boston communities. It looks forward to continuing to work in the spirit of its mission for years to come.