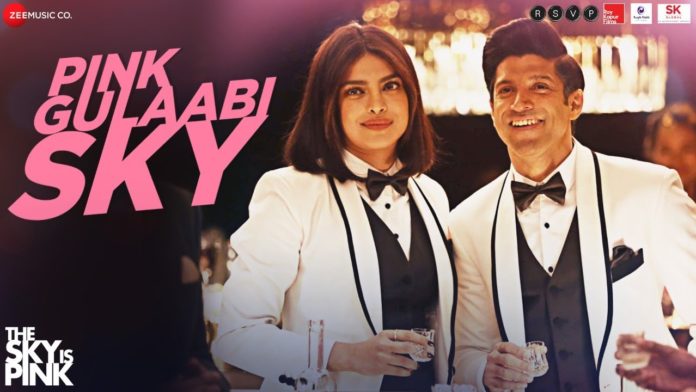 The statutory note first: Don’t forget a box of tissues. Sky, pink or white — take your pick in colour but the tissues are a must, more than cola and corn. “The Sky Is Pink”, Shonali Bose’s most commercial film yet, rides exaggerated sentimentalism aimed to keep your tearducts working overtime while the show is on.

With a star cast and budget bigger than Bose’s past efforts – “Amu” and “Margarita With A Straw” – all of the above would make perfect sense. You can’t possibly settle for anything less mainstream as a director with Priyanka Chopra starring in and co-producing your film. Bose’s Sky was always meant to be Pink with pop cinema formulae rather than emerge as an effort that explores finer aesthetics.

Still, within the gamut of Bollywood mainstream, “The Sky Is Pink” registers itself as one of the more sensitive attempts released this year. Much of that quality owes itself to an overwhelming true story on which the screenplay is based.

The problem is the creative crew does not seem in the mood to craft a nuanced plot and characters using the inspiring real-life account at hand. Rather, writer-director Bose and her co-scripters (Juhi Chaturvedi and Nilesh Maniyar) seem more interested in fashioning a functional, box-office compatible melodrama.

The story is narrated through the voice of Aisha Chaudhary (Zaira Wasim) who, we understand right at the start, is dead. Aisha’s narrative introduces us to her mother Aditi (Priyanka), who the girl lovingly calls Moose, and her father Niren (Farhan Akhtar), who is Panda to her. Aisha has an older brother Ishaan (Rohit Saraf), dubbed Giraffe for his lanky frame. We also learn Aditi and Niren had another daughter before Aisha, who passed away as a newborn.

“The Sky Is Pink” tries to capture the agony of a couple coping with the grave, incurable malady their daughter is afflicted with, which will draw her to inevitable doom. For Aditi and Niren, the trauma is all the more acute because they have already suffered the loss of one child before. Yet, they keep their spirits buoyant and fights against all odds to face every crisis coming Ayesha’s way, as long as she is alive.

There is a sense of inevitability about the story, given its theme. And if this is overall a tale of despair, Bose struggles to find ways to alter that mood as the narrative flows. Stray, half-hearted attempts at humour flit past, as Aisha narrates the story. She informs us, for instance, with a wry note how her death has left Aditi and Niren’s sex life in a mess. The mother’s determined attempt to hook Ayesha up with a dishy boy she has a crush on also makes for comic relief.

Most of the film, however, uses the largely flashback-driven storyline to generate schmaltz. Too much of overdone melodrama plays out over a runtime that seems too long at nearly two and half hours. It tends to make you restless.

The film scores on two counts, primarily. Despite being a maudlin shot at storytelling, it is never loses focus from what it intends to do to its target audience. “The Sky Is Pink” is credibly written and executed to that effect.

The second aspect is the cast. The acting is overall impressive. Priyanka Chopra’s alpha mom act is far from perfect but, oscillating between vulnerable and resilient, she is effective in the way she plays Aditi.

Strangely, for a story that allots big space to their romance, Aditi’s chemistry with Niren isn’t as engaging as you would expect it to be. The mush isn’t quite pink for these two seasoned performers as a couple, although the scope would seem inherent somewhere in the plot. Also, in a story that unfolds through well over two decades, neither Aditi nor Niren seem to age convincingly.

While on Farhan, he essays yet another trademark, understated performance. He seems more at home than Priyanka in imbibing the various phases of his protagonist’s character.

If “The Sky Is Pink” aimed at being a slightly different brand of mawkish melodrama, the film’s music team (Pritam’s tunes on Gulzar’s lyrics) is effective. The film has only two songs – “Dil hi toh hai” and “Zindagi” – and both numbers have been adequately created and utilised within the screenplay.

For all its flaws, “The Sky Is Pink” works for the simple moral science lesson it leaves behind: Your loved ones matter most. Come to think of it, nothing regales the true-blue Bollywood buff than that sort of a message. (IANS)