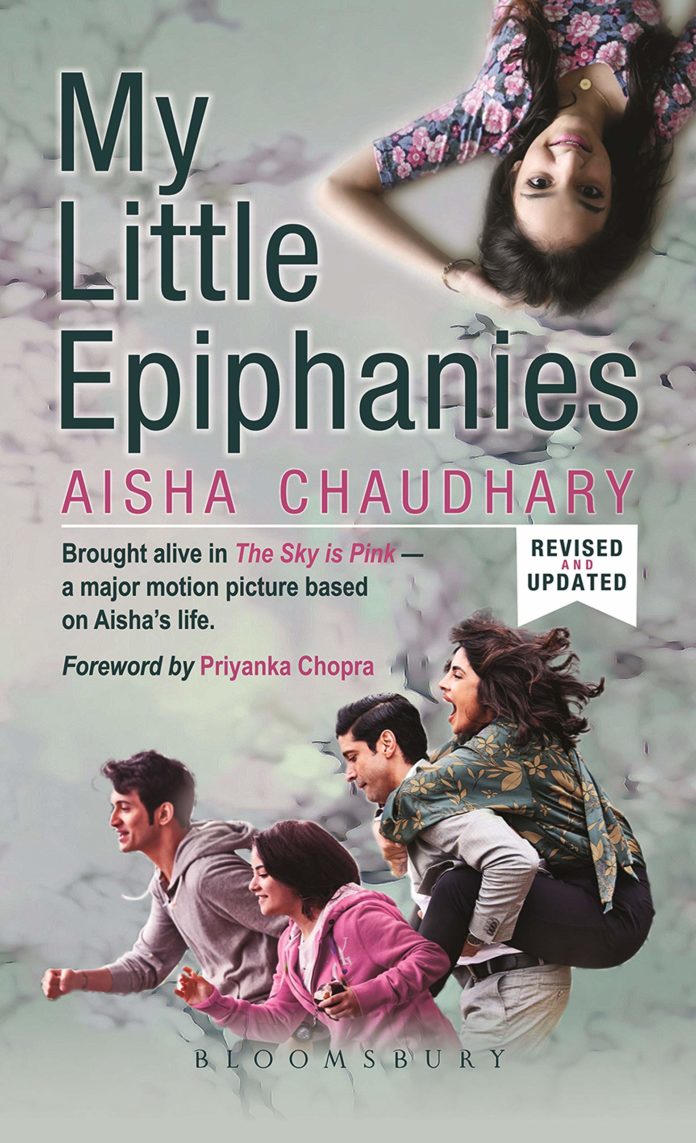 New Delhi– Read the epiphanies – sudden and striking realizations – of a girl born with SCID (severe combined immune deficiency) who died two months before her 19th birthday and through whose lens is told the love story of her parents in the just released Hindi movie “The Sky Is Pink”.

Be inspired by the fortitude of a Holocaust survivor who went on to become an accomplished harpsichordist; and finally, examine some creative solutions for Indian cities.

“Before reading, I would like you to know that this isn’t written like any ordinary book. It’s more of a way to express my thoughts that come to me as the days go by. Actually, my days aren’t very ordinary either. Not for an 18-year-old girl, that is,” Aisha says in the author’s note.

“The fact that I am sitting here, writing these words, is a miracle. I would not have been here, on this earth, for more than a year had destiny not changed its mind.”

In “My Little Epiphanies”, Aisha takes a hard look at her own feelings and what it was that gave her a sense of hope and control. These thoughts gave her life purpose and meaning, something to hold on to.

Aisha underwent a blood stem cell transplant – her father being the donor – when she was six. As a side effect of the therapy following this, she developed pulmonary fibrosis – a condition that causes irreversible scarring of the lungs. Born on March 27, 1996, she died on January 24, 2015.

Actress Priyanka Chopra, who plays Aisha’s mother Aditi in “The Sky Is Pink” has described the book as one that “makes you feel inspired and yet heartbroken”.

“Many will feel her pain like it’s their own and some may find solace in knowing that they are not alone in the various challenges that life throws. No matter how you feel, it will make you step back, look at everything you’ve got going for you and appreciate and enjoy the gift of life you have,” Chopra writes in the foreword of the revised and updated edition of the book.

“I still hope there is enough evolution left in our brains as they expand that we are able to share our experiences with the young so that they don’t make the same mistakes. Sometimes being old is a terrible thing, because I know from my own experiences that I could warn people not to behave in certain ways, if they would only listen. If we are able to develop that ability then, in a way, there is hope for us. Otherwise not,” Ruzickova writes in this posthumously published memoir, a grim reminder of the Holocaust and which still holds true, given the troubles sweeping the world today.

Ruzickova grew up in the Czechoslovakia of the 1930s, dreaming of two things: Johann Sebastian Bach and the piano. Her peaceful, melodic childhood was torn apart when the Nazis invaded in 1939. Uprooted from her home, transported from Auschwitz to Hamburg to Bergen-Belsen, bereaved, starved and afflicted with crippling injuries to her musician’s hands, she faced a series of devastating defeats.

And yet, she went on to become one of the 20th century’s most renowned musicians and the first harpsichordist to record the entirety of Bach’s keyboard works. She recorded over 100 albums, performed across the world to great acclaim and became an influential teacher at the Prague Academy. She died in Prague in 2007 aged 90.

In sum, the book is a joyful celebration of art and resistance.

Could an underground skyscraper, rather mudscraper, be a plausible idea for a future city? Can electric cars combine with smart homes to make a completely movable family unit, asks architect and artist Gautam Bhatia in this book, which grew out of a grainy combination of despair and delight that afflicts the residents of every Indian city.

For instance, while working on a clothing design outlet in Lower Manhattan, the architect suggested that the owner make his office in the oversized service elevator, enabling him to be constantly on the move between the 12 factory floors.

“Could houses similarly be hydraulically moved above ground and below depending on climate and season? Could the constructions in history and archaeology provide clues to the future use of buildings….The unimaginably wide disparities in living conditions seen today must force imaginative solutions. Many such proposals may oscillate between silliness and perversion, but if at all a future potential for realisation exists, then every generic bash is worthwhile,” Bhatia writes.

Little wonder that eminent artist Anjolie Ela Menon has described Bhatia as “an insightful critic of our times and particularly of the burgeoning urban matrix that is modern India”.