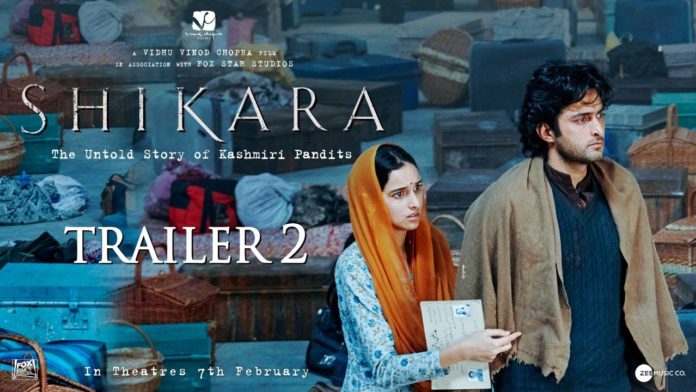 It would be fairly correct to say “Shikara” has been one of the more anticipated films of the season, at least for the section of Bollywood watchers that reads reviews. The film’s core — exodus of Kashmiri Pandits from the Kashmir Valley in early 1990 owing to Islamist insurgency — promises poignant drama. Importantly, “Shikara” revisits a slice of modern Indian history that Bollywood forgot to acknowledge, and the effort is brought to life by a veteran filmmaker hailing from that region.

“Shikara” could be the definitive socio-political thriller Bollywood has been forever trying to make but never quite managed, you’d go in thinking.

For the sake of drama, writer-director Vidhu Vinod Chopra introduces a fictional love story into the historic reality on which his film is based. The formula has been a popular one in Bollywood for decades now — at random, you could think of Chopra’s own “1942 A Love Story”, Mani Ratnam dramas as “Roja and “Bombay”, or Kabir Khan’s recent web series “The Forgotten Army” a while back.

The love story that “Shikara” anchors its narrative on plays out between Shiv (Aadil Khan) and Shanti (Sadia), who become the face of the lakhs of Kashmiri Pandits who were forced to flee their homes to save their lives and honour.

In aggressive promotional campaigns pre-release, and also through the film’s trailer, Chopra has talked about the atrocities that the community suffered on being uprooted from their homes and, equally shocking, the appalling apathy and rejection they faced when they tried to blend in with the rest of the country. As a voiceover had explained in the trailer, Kashmiri Pandits became refugees in their own country. The focus of the film is to play out that idea through the screenplay that Chopra sets up along with his co-writers (Rahul Pandita and Abhijat Joshi).

As the story moves ahead narrating nearly three decades of ordeal that Shiv and Shanti’s saga will survive, you realise what the basic problem about this film is. Chopra is trying to be too amiable discussing the whole issue. He is playing it too safe.

Sure, there are some genuine moments that tug at your heart. Chopra uses poetry beautifully to portray angst and pain, but “Shikara” seems more interested in floating on tested waters of ‘love in the time of strife’ formula, rather than probe meaningfully into the political realism that triggered off such a momentous tragedy.

The film does touch upon expected aspects of the immense exodus it is based on. The violence that drove Kashmiri Pandits out of their homes is kept at a minimum, yet it is effective enough to convey the shock and fear of the victims. The odd sequence in the refugee camp that lays bare how a happy community is reduced to a horde of refugees, and no one is bothered, has impact.

These, though, remain token nods to the subject at hand. They sink under the filmmaker’s inexplicable urge to give precedence to mush and melodrama.

Shiv, a teacher, is a ‘shayar’ at heart and in disposition, and his verses are beautifully brought alive by debutant Aadil Khan’s resonant tenor. He becomes the voice for much of the film’s pathos. The debutant impresses with screen presence, as he exudes carries the film on his strapping shoulders. His co-star Sadia puts up a functional act as the demure but sensible Shanti. Her characterisation sorely lacks the sparks in the way the writers have imagined it, and the greenhorn actress struggles to emerge beyond its mediocrity.

Technically, this is an accomplished effort. Rangarajan Ramabadran’s camera work is effective in the way it brings alive the essence of a Kashmir that burns, without going over the top with the images. The stark refugee camp scenes look authentic and bear the stamp of credible art direction (Prasad Surve and Hemant Wagh) and production design (Sonal Sawant). The editing (Shikhar Misra) could have been sharper, especially in the second half.

Yet, for all its technical gloss, the film seems surprisingly shy when it comes to delving into the painful political context of the tragedy that forms its plot. For all the hype around what it had promised to deliver, “Shikara” reveals little ambition to be anything more than an enjoyable Bollywood love story. (IANS)