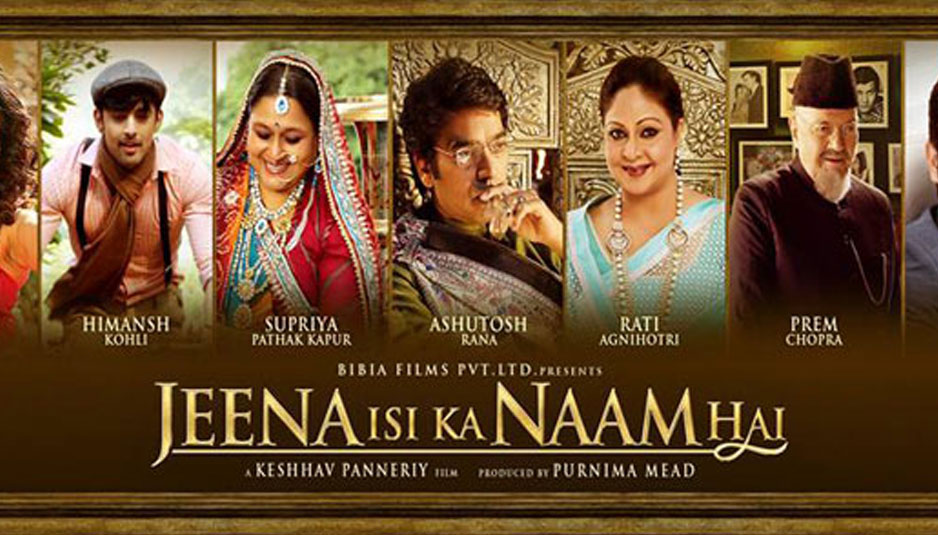 “Jeena Isi Ka Naam Hai” is essentially a generic and regressive story about women in India.

It is the life journey of a renowned author, Alia Patrick (Manjari Fadnis).

Directed by Keshhav Panneriy, the film, his directorial debut, with excellent production values, begins with a promise, but soon dissipates all notions of a good entertainer.

The narrative begins with Alia getting felicitated at the White House for her book, “A Little Heaven In Me”. But just before the ceremony begins, she decides to rush to Rajasthan, India, for the last rites of her well-wisher and former maid, Laxmi (Supriya Pathak).

And from then, the narration gets into flash-back, encapsulating the milestones in her life; born Alia Patrick, how she was ill-treated by her alcohol-loving father and an unreasonable mother for being a girl-child, her brief romance with her classmate Alex (Himanshu Kohli), her wedding with the Royal Vikram Pratap Singh (Ashutosh Rana), her escape to Mumbai where she works for Shaukat Ali Mirza (Prem Chopra) the editor of a paper and finally after migrating to the US her second marriage to a business tycoon Aditya Kapoor (Arbaaz Khan).

The film is Manjari Fadnis’s canvas and she delivers competently as the righteous and self-made woman. She is aptly supported by the rest of the cast. But, it is sad to watch Rati Agnihotri being wasted in a one scene role.

The film may be a realistic portrayal of events, except that it trudges on a convoluted, verbose plot, filled with plot-holes and poor characterisation.

Amateurishly crafted and lacking finesse in terms of the script and dialogues, the fault also lies in its conceptualisation. It is the writing and direction which are flawed.

On the production front, the film is mounted on a lavish scale with decent production values. The locales and sets are well exploited and some top-angle frames are truly impressive. Also the editing is worth a mention.

Overall, with a 170-minute run time, and with no inciting moments, the film is painstakingly boring and tedious to watch.