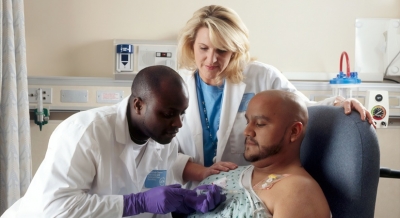 New Delhi– While breast cancer among women is well known, men as well as transgenders can also be at risk, said experts on Thursday.

The experts said that social stigma and lack of awareness hold back people from taking timely treatment, driving overall less survival rates for men than for women.

According to the American Cancer Society, a man’s lifetime risk of developing breast cancer is about one out of 833 men. But the signs and symptoms are the same as in cisgender men and women: with a nodule/lump/ulcer/nipple discharge sinus/nodule in underarm and around collar bone/skin changes.

“Since males don’t expect to get breast cancer commonly, they are not in the habit of checking their breasts on a regular basis. It might come as a shock to them to notice a lump in the breast. They might not even notice it soon, since it starts with a painless lump unless it becomes significantly prominent to be visible,” Dr Vaishali Zamre, Sr. Consultant and Head – Breast Oncology Unit-2 at Rajiv Gandhi Cancer Institute and Research Centre (RGCIRC), told IANS.

Among transgenders, hormone usage increases the risk of breast cancer, developing typically 3-4 decades after the usage.

A 2019 Dutch study revealed that breast cancer among women is to the tune of about 12 per cent while in men it is 0.1 per cent. At the same time the risk in a trans woman (born man but has female identity and transformed as woman by using feminising hormones) increases to 46 per cent as compared to the men with no hormone usage.

The study observed similar risk in women and transmen (born women, but has male identity and transformed as man by using masculinising hormones).

“The risk of breast cancer is higher in the transgenders who are on hormone therapy (sex affirming hormones) as compared to general population of men and women – cisgender men and women. The effect is more in trans women receiving the female hormones,” Dr Upasna Saxena, Consultant, Radiation Oncology, HCG Cancer Centre Mumbai, told IANS.

It is reported to be around 31-47 per lakh population of transgenders as reported in different studies. Also, they show a younger age at diagnosis, Saxena said.

More than the disease men and transgenders with breast cancers suffer from psycho-social impact because of the social taboo, the experts said. Many transgenders also remain uncomfortable to be open about their birth gender vs identity or use of hormones, delaying their treatment and survival rate.

Further, breast cancer affects men differently. As they have fewer breast tissues compared to women, the spread of the disease is faster than women.

“While it can make it easier to detect smaller lumps, however, it also means that the cancer has less room to grow within the breast. As a result, it may quickly spread to nearby tissues/organs,” explained Dr Meenu Walia, Senior Director, Medical Oncology, Max Super Speciality Hospital, Patparganj.

“For these and other reasons, around 40 per cent of men with breast cancer are diagnosed in stage 3 or 4, when the disease has already spread to other parts of the body. As a result, overall survival rates are lower for men than for women,” Walia added.

Factors that increase the risk of male breast cancer include older age, exposure to oestrogen (majorly used for hormone therapy for prostate cancer), liver disease such as cirrhosis and obesity.

Family history also plays a role as some men inherit abnormal (mutated) genes (BRCA 1 BRCA 2) from their parents that increase the risk of breast cancer. Due to late detection, chances of surviving five years or more after diagnosis are, on average, very low. (IANS)