TRUMBULL, CT–Cultural extravaganza showcasing the rich cultural traditions of India was displayed elegantly in dance, music and drama along with the traditional Onam Sandhya were some of the highlights of the 10th annual Onam celebrations organized by Malayalee Association of Southern Connecticut (MASCONN) at Madison Middle School in Trumbull, CT on Saturday.

The unique and rich traditions of Kerala with renditions of traditional and modern dances and the integration of Hindu, Muslim and Christian cultures were elegantly showcased in nearly three hours of beautifully presented before an audience of over 400 people from the Fairfield County in the state of Connecticut.

This fast growing presence of the Indian American community was evident when more than four hundred people from across the southern state of Connecticut came together to participate in and cherish their rich cultural heritage and be part of the annual Onam celebrations. The more than four-hours long cultural extravaganza was in many ways “reliving the culture and traditions” and a “cherishing the past with a view to pass it on to the future generation.”

Men, women, children and youth dressed in traditional attire, were welcomed with a colorful Pookoalm and the traditional lamp at the entrance of school, giving them a warm traditional Indian welcome. 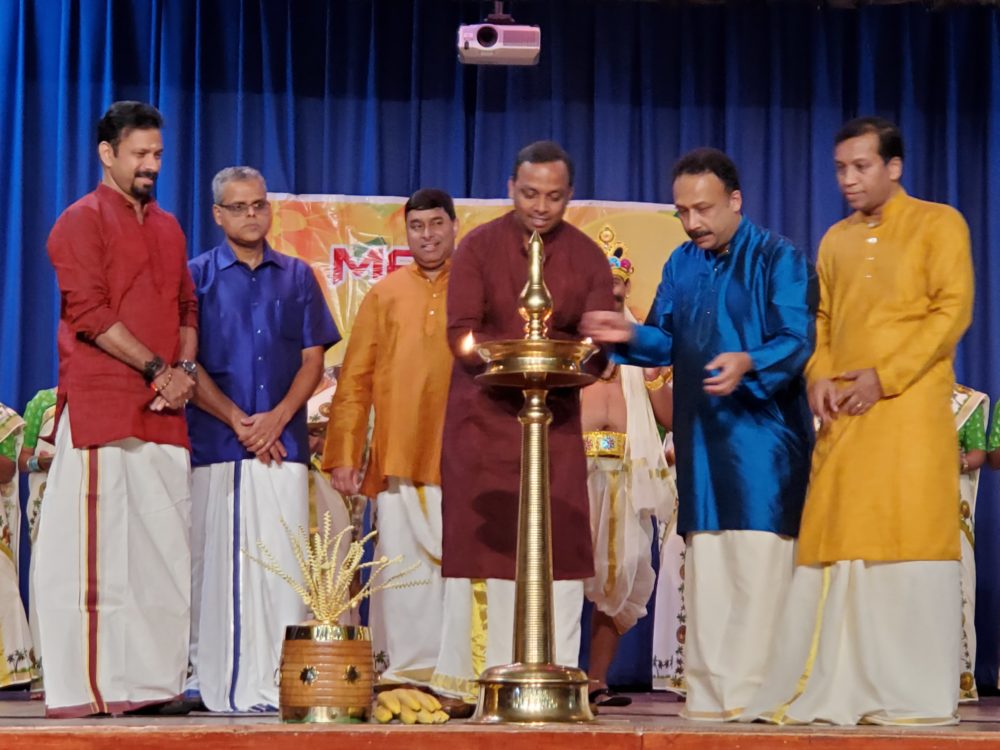 The cultural programs began with the lighting of the traditional Nailavilakku or lamp by honored guests of MASCONN and the executive committee members. Legendary King Mahabali was welcomed to the stage with “Pancha Vadyam” and a warm traditional welcome dance by a dozen beautiful girls elegantly dressed in traditional attire of Kerala, who later on performed Thiruvathirakkali, a folk dance, typically a Keralite dance, well known for its essence, grandeur and simplicity.

In this traditional dance form, women clad in traditional Kerala attire with gold brocade attached to it and wearing jasmine garlands on their heads, rhythmically moved around a lighted Nilavilakku, singing and clapping their hands, to the tune of a particular genre of songs called Thiruvathirappaattu, which  is meant solely for this graceful dance.

“Onam awaits one very special visitor, Kerala’s most loved legendary King Maveli. He is the King who once gave the people a golden era in Kerala. The King is so much attached to his kingdom that it is believed that he comes annually from the nether world to see his people living happily. It is in honor of King Mahabali, affectionately called Onathappan, that Onam is celebrated,” a young child on stage explained the story behind this cultural festival of Kerala, a southern Indian state.

The cultural events consisted of several live dances, classical Bharatnatyam, fusion, Bollywood, folk and contemporary dances, live music and songs, sung in Malayalam, a language spoken by Malayalees around the world. Children from the ages of five to older adults delighted the audience with their melodious voices, and several dances both cinematic and traditional art. Through “Oppana” another traditional art from Kerala, a group of young talented kids presented yet another tradition of Kerala.

A special to Onam celebration this was a fusion of dances incorporating semi-clasical, Thiruvathira and Bollywood dances beautifully performed by a group of women, who have come to be known as the “Dazzling Girls” of MASCONN.

Another attraction and a much appreciated item powerfully portrayed by a group of talented young girls was a Dance Drama called “Jatayu Moksham” derived from the Epic Ramyayana, where Sita was kidnapped by Ravana, who was instigated by his sister Shurpanaka, who wanted to take revenge on Ram and Lakshman for “humiliating’ her by not giving into her urges to marry her.

“MASCONN an offshoot of the natural growth of the Indian-American especially Malayalee Community in the southern Connecticut region,” said Wilson Pottackal, President of MASCON, in his welcome address. “In a very short period, we have grown by leaps and bounds and we strive to meet the growing needs of our community.

In his Onam message, Mahabali told the audience that the “beauty of the festival lies in its secular fabric. People of all religions, castes and communities celebrate the festival with equal joy and verve. Onam also helps to create an atmosphere of peace and brotherhood by way of various team sports organized on the day,” he added.

The whole ambience was filled with nostalgia since it was an occasion for all the Malayalees in Connecticut to cherish their childhood memories, especially everyone enjoyed the sumptuous Onam Sadhya (meal), the most important and main attraction of the day with different traditional dishes and ”payasam” that was served on banana leaves.

Living in countries that are far away from their homeland, in the midst of different cultures, busy with the day-to-day mundane work and home tasks, the Non Resident Indian (NRI) community made this “land of opportunities” their home, have brought with them these cultural traditions and have sought to pass them on to their children, who are often born and raised here.

Onam is a festival celebrated in the south-western state of Kerala, India. The Keralites or the Malayalees, the illustrious people of the beautiful state are known around the world, celebrate the festival of Onam wherever they are.

The celebration of Onam festival provides them with a perfect opportunity to encourage the new generation of children of Indian origin to witness, learn and appreciate these rich traditions, even while it offers the first generation NRIs to stay connected and cherish the rich cultural heritage they hold so dear to them.