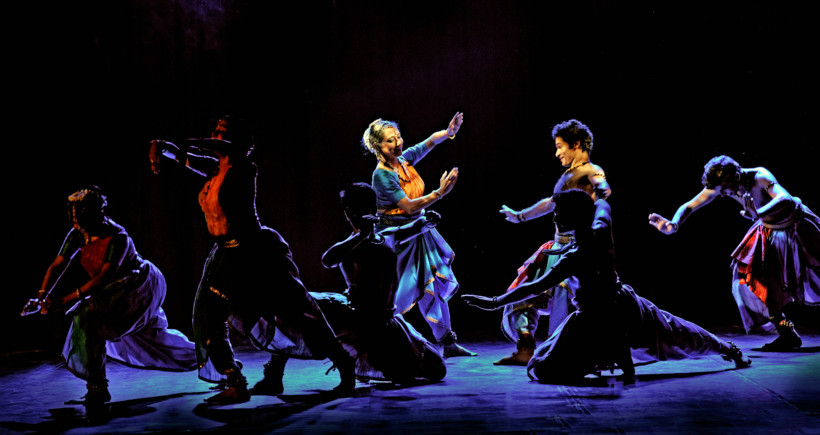 ANDOVER, MA–Guru Leela Samson and her troupe Spanda recently presented ‘Nadi’,  a dance tribute to the river, the ceaseless flow of waters through the diverse lands of India; capturing the colorful tapestry of its peoples, stories, music, and ideas. This show was brought to the Boston area by Isha Foundation, which has launched a worldwide ‘Rally for Rivers’ campaign to replenish India’s depleting rivers.

‘Nadi’ explored love and longing, the physical changes and the deep philosophy that the river has inspired through the centuries-old voices of India’s poets. From Sufi fakirs in the North to Baul singers in Bengal to Sangam poetry and classical composers in the South – an ocean of poetry has been penned inspired by the river. The superbly chosen poems and songs in six Indian languages, many of which are well-known traditional melodies, have been reinterpreted and woven together anew by the musical genius Rajkumar Bharathi. 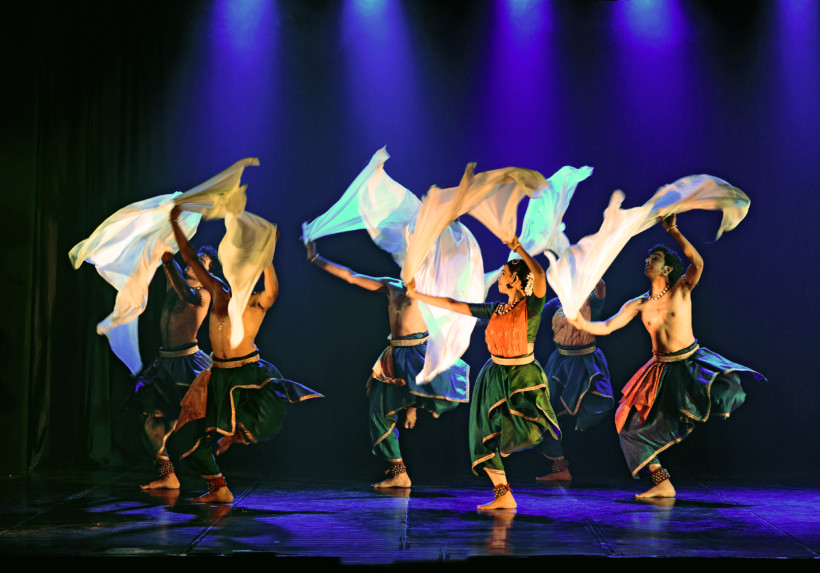 Leela ji’s supremely architected choreography created a rich visual experience that engaged the senses instantly and then the lyrical storytelling transported the audience into a special space beyond the mundane dimensions. It takes a master to capture the attention of a diverse audience and bring it into resonance, and Leela ji seemed to have swiftly invoked it from the first moment, where one became a witness to a divine spectacle.

In ‘Vaighai’, performed on verses from the Ettuthokai, a Sangam Tamil poetic anthology, the dancers depicted the river raging in monsoon, the wind, the cloudbursts, the flowers dispersing on the mountain slopes, and young lovers bathing in the river. As we traveled back in time to the 7th Cent CE, the nuances of their romance and emotions – all of it painted an immediacy bathing us in a broad range of rasa-s.

Then in ‘Sundar Sari’, based on a Purab Nirguni Thumri, one could feel helplessly getting swept in the ephemeral passage of life in contrast with the deep quest to be ensconced in the fold of the eternal self – ‘what use are my beauty, my youth, my jewels – O! River Ganga take me to my beloved’.

The classical arts of India set an ambitious goal for the artist to deliver to the audience a bridge beyond time, space, and death. Guru Leela Samson and her seven dancers kept us in play with the endless streams of life, its immanence, its beauty, the struggle to use our brief time here in replenishing the river of life with delight and gratitude.

‘Natya’ as espoused by Saga Bharata, must contain dance, music, songs, and, acting, with the singular purpose of evoking a higher taste, a taste of the transcendental. Witnessing Leela Samson, her presence, and her ‘abhinaya’ was overwhelming; especially, when I thought of her contribution to the classical arts of India, the many generations of dancers that she has groomed, and yet remained untouched by the glory. There is an effortless silence about her, a ‘bindu’, a center, which is rare to maintain after significant accomplishments and recognition. Pray the coming generations of artists can cultivate such equanimity, and uncompromising quality.

“We were speechless after the performance by Guru Leela ji and her Spanda dance troupe. Our teacher, Sadhguru says that, ‘the campaign for rejuvenating India’s rivers can only succeed if people see the rivers as their mother, an integral part of their own personal lives’. Leela ji enthralled us by touching us all at a very deep level. It has been an honor for us to host her in Boston”, commented Dr. Balachundhar Subramaniam, of Harvard Medical School, who leads the Isha Foundation efforts in the Boston area. For information on the ‘Rally for Rivers’ campaign: www.rallyforrivers.org.

(Shekhar Shastri is a poet-musician and teaches Indian poetics and dramaturgy, inspired from the ‘Natyasastra’ tradition. He is a Director of Meru Education Foundation and producer of Rāga-Rang, where Indian Classical Music meets cutting-edge melodies)