New Delhi–Duchess of Cambridge Kate Middleton’s vibrant and fresh look in a creation by popular Indian designer Anita Dongre has caught the eye of fashionistas around the world. The designer says the British Royal’s decision to flaunt her creation has given such a “new high” to her collection that her e-commerce website came crashing.

Dongre’s dress — a long, breezy printed tunic with Mughal details — looked perfect on Middleton, who is looked at as a style icon globally, during the first day of her maiden visit to India.

In an interview to IANS, Dongre, who had showcased the ensemble from her summer 2016 collection ‘Love Notes’ at the Lakme Fashion Week earlier this month, said: “It has already given a great boost to our recently launched summer 2016 collection ‘Love Notes’. This was a dream debut sighting from our recent Lakme Fashion Week runway showcase and I am overwhelmed to be the first Indian designer she chose for this trip.”

Dongre, who is known as much for her pret lines as for her couture creations — which are a blend of traditional and contemporary — admits Kate’s patronage of her design “has given new high to the line; so much so that our e-commerce website crashed last night with constant queries pouring in from all over the world”.

She said that the Duchess of Cambridge, who is in India on a trip with her husband Prince William, is every designer’s dream muse.

“I’ve always been a huge fan of the Duchess of Cambridge; of her elegance, impeccable style and her poise. She is every designer’s dream muse,” said Dongre, who is not only a celebrated name in the Indian fashion industry but also a successful entrepreneur, thanks to her brand AND Design India Pvt Ltd. 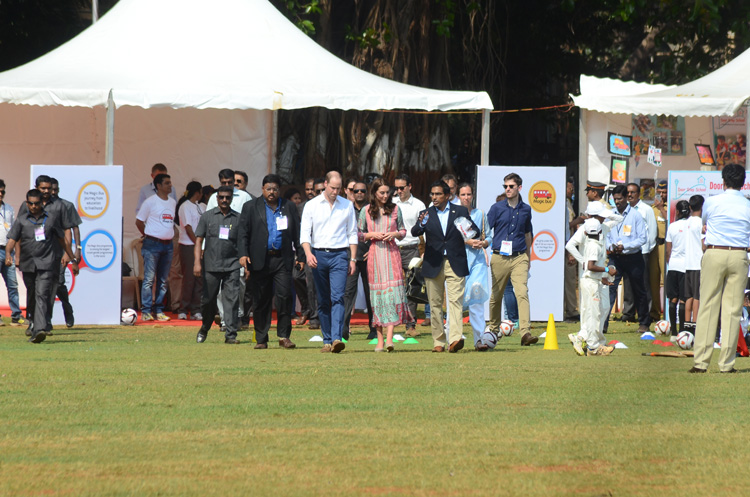 Kate arrived in Mumbai wearing a red printed Alexander McQueen ensemble on Sunday along with Prince William, who looked dapper in a dark blue suit paired with a white shirt and black shoes. Later she wore Dongre’s dress and seemed comfortable even as she played cricket while wearing it.

Asked if Dongre would like to see Kate wear a traditional Indian outfit, she told IANS: “To me, comfort is of paramount importance and I’d say that she should wear what she is most comfortable in. If she does manage to wear a sari, she will definitely carry it with utmost grace.”

The British Royal couple will travel to Assam on Tuesday and then to the neighbouring Himalayan kingdom of Bhutan on April 14 returning on April 16 for a visit to the Taj Mahal, a Unesco World Heritage monument, in Agra at the conclusion of their two-nation tour. (IANS)