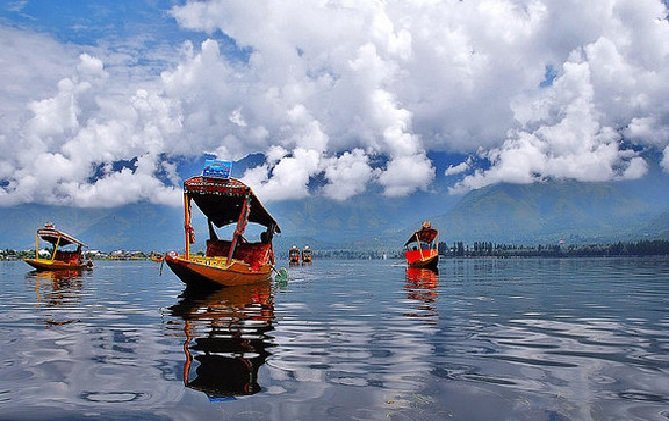 Is there a competition between the various states of India to snatch a piece of action from Mumbai and Maharashtra when it comes to filmmaking? State after state is announcing subsidies, hospitality and other attractions to lure film producers for making their films in the state.

The latest to roll out a package for filmmakers is the Union Territory of Jammu and Kashmir. Not very long ago, the Government of Madhya Pradesh had announced a very attractive sounding film promotion policy in the state. The state government promised just about everything from locations, police protection at location, concessional stay and, mainly, cash subsidies. Taking a cue, the Jammu and Kashmir Government has followed a policy similar to Madhya Pradesh.

Governments make many promises of setting up shooting and recording studios, but never go all the way. Not all that is put on a proposal materializes. Such policies fizzle out and remain unfulfilled. Regimes change, officials change and, at times, so do the policies.

I remember Uttar Pradesh planned and set up a film city in Noida in the 1980s and offered plots of land to filmmakers. The price tag was the main attraction. The idea was to set up shooting studios, recording studios and all that was necessary for making a film. None of the filmmakers among those who bought it, actually did so or produced a film there. Not many had the resources. Most took this as an investment opportunity and did not share the government’s vision of setting up a film industry.

What happened in Noida was that many film producers bought plots and later sold them at a profit. It may still be called a film colony but little or nothing related to the film industry happens there. Yes, some TV studios and such ventures operate from there as do news channel studios. The positive thing about these state-sponsored subsidies is that even the television programme makers of serials, web series, documentary makers, short filmmakers, regional filmmakers and such are entitled to the benefit as the offer is not limited to those making feature films.

The purpose behind offering sops to the film industry is that a film can showcase the virtues and other attractions of the state to the masses who turn out to watch a film and help promote the state as a tourist attraction which, in turn, can earn revenues.

Kashmir does not really need media promotion or films to project its beauty. It has always been a favourite destination for tourists. Not for nothing is it called paradise on earth. Every Indian’s wish has been to visit Kashmir at least once. As for films, again, it was THE destination to shoot romance and romantic songs. Film after film used Kashmir as a sought-after place for stars to fall in love and sing songs. This, despite the fact that it was not an easy job to move a film unit with heavy equipment like lights and camera so far away from Mumbai.

In fact, Shammi Kapoor could have easily been labelled the brand ambassador of Kashmir. The song from his film, Junglee, ‘Yahoo, chahe koi mujhe junglee kahe’ followed by the romantic songs from his film, Kashmir Ki Kali, gave the state so much exposure, it became the place to visit. Shashi Kapoor’s evergreen love story, Jab Jab Phool Khile and Manoj Kumar’s Himalaya Ki God Mein carried on promoting Kashmir. After all, Kashmir was one such place where, if the same location was shown in many films, the viewer would not mind it. Because, the place boasts of natural beauty with variations according to seasons. The insurgency which peaked in the 1990s put an end to film activities there. This could not be said of the other states which have monuments to offer rather than the breathtaking beauty of Kashmir.

A few more films followed during and after the unrest in Kashmir. But, sadly, they were not the kind instilling romance or helping to portray Kashmir positively like films earlier. They were mostly about a certain filmmaker’s views of the unrest in Kashmir being peddled.

The problem with these states offering a whole lot of goodies as if they want to snatch the entire film industry from Mumbai and the South is that it is not going to happen. A filmmaker does not need most of it. No maker would use a studio, a lab or other facility anywhere other than the place he is based in.

While film producers would be interested in the subsidy amount and the locations, concessional hospitality along with safety during shootings, they would rather they did their post-production where their own industry was based. So these states might as well save the resources instead of investing in infrastructure.

Jammu and Kashmir intends to promote films in local language like Kashmiri, Dogri, Urdu, Pahadi and Gojri for which it may need the infrastructure but it would be wise to weigh the financial pros and cons. The cinema screen is the main facility needed urgently.

Ironically, while the Union Territory of Jammu and Kashmir may want to promote the local language, Jammu has about a dozen operational cinema properties, Kashmir has none and hence no audience. The very few cinemas that Kashmir had were forced to shut down when terrorism and unrest began in the 1990s. Of course, the authorities plan to reopen cinemas in Kashmir besides adding some more, it also plans to upgrade the existing cinemas in Jammu.

*The one positive for the exhibitors, especially the multiplex chains, is that the first new film has premiered at the cinemas and not on OTT, which was becoming a norm during the lockdown. Producer Vashu Bhagnani has released his latest film, Bellbottom, theatrically exclusively with an understanding that its OTT release will happen only after a four-week gap.

Released at around 1,800 screens, this will be a test case for how the cinegoer responds to post-pandemic cinema going. Although the lockdown has been relaxed and commercial activities have resumed, the Covid-19 threat has not gone away totally with various groups and the media airing its own predictions about the impending third wave.

The first day collection of Bellbottom was estimated to be under Rs 2crore, which is not a great start considering it was playing at as many as 1,800 screens. But then, there was little or no awareness of the film’s theatrical release. Also, the film would have been expected to grow on word of mouth promising better figures by Sunday. This may not be the right Sunday as it falls on Raksha Bandhan, which may dent the film’s prospects, especially, in the Hindi belt. But, it is a start. (IANS)