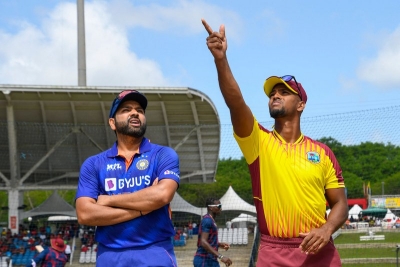 Basseterre (St Kitts)– Cricket West Indies (CWI) said that the start of Monday’s second T20I between India and West Indies has been postponed to 1:30 p.m. local time, which will be 11 p.m. Indian Standard Time (IST).

“The 2nd match in the Goldmedal T20 Cup, presented by Kent Water Purifiers between the West Indies and India will now begin at 1:30 p.m. local time – further information will be provided subsequently,” said an official update from CWI.

Now, as per their latest update, the start of the second T20I at Warner Park has been pushed by another one hour. It means that the toss may happen at 1pm local time, which is 10.30 p.m. IST.

India are currently leading the five-match T20I series against the West Indies 1-0 following their victory by 68 runs on Friday at the Brian Lara Stadium in Tarouba, Trinidad.

The visitors, under the captaincy of stand-in skipper Shikhar Dhawan, had earlier won the ODI series 3-0 with all matches played at Queen’s Park Oval in Port of Spain, Trinidad. (IANS)