BOSTON– India’s AYUSH Minister Shripad Naik inaugurated the second annual Integrative Medicine, Yoga and Ayurveda Conference in Boston and said yoga is the greatest gift of India to the world for peace. The two-day conference was held at Harvard Medical School and was attended by about 250 people.

The theme of the conference was on Integrative Medicine – Role of Yoga and Ayurveda in Pain and Opioid Addiction Management.

“Yoga is the greatest gift of India to the world for peace and harmony,” Naik said in his inaugural address. He went on to elaborate how the practice of yoga helps even the cabinet and government officials to become more efficient through developing inner strengths. 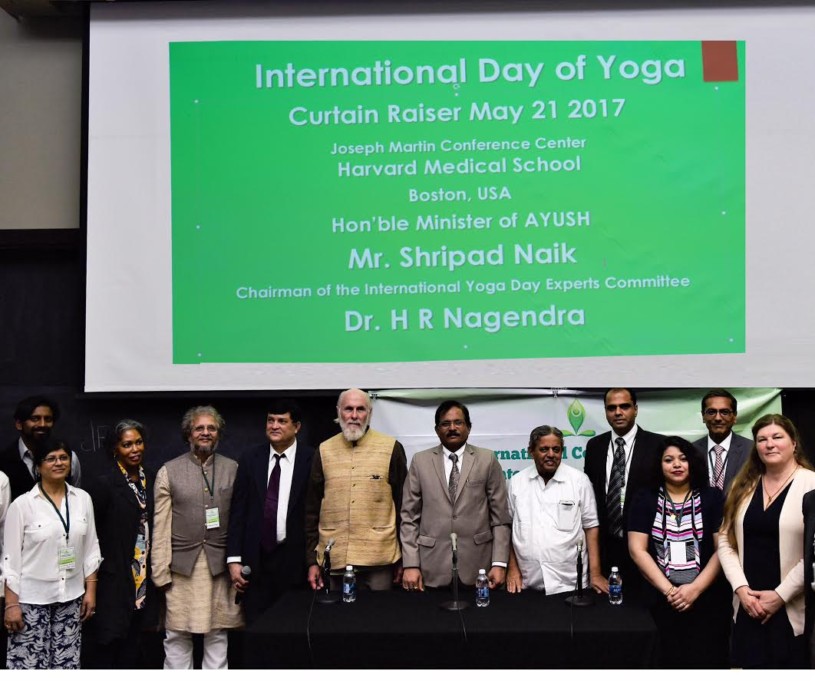 Kanchan Banerjee, Director of Indo US Health Initiatives, and Co-Chair of the organizing committee, welcomed the participants at the conference, which was held on May 20-21.

The conference included various sessions with experts and eight workshops on the practice of Yoga and Ayurveda for physicians and nurses, which were offered by prominent practitioners and schools.

Dr. Nagendra informed the audience how the celebrations of IDY is expanding in India and the entire world. The AYUSH ministry now holds International day of Yoga festivals all over the country which include various types of Yoga and its significance to public health. He described how the AYUSH ministry is implementing the vision of India’s Prime Minister Mr. Narendra Modi to tackle the problem of diabetes with Yoga in India and across the world. Dr. Nagendra said over 400 million Indians practice Yoga by now. Its popularity is increasing everyday around the globe.

The curtain raiser for the IDY was presided over by an eminent Vedic scholar, Dr. David Frawley. Ms. Renu Singh, a certified Yoga instructor and PhD student at Georgetown University led the participants to do a modified version of Surya Namaskar (sun salutations) and other poses. A video message from a renowned mystic, author, poet and founder of the Isha Foundation Sadhguru Jaggi Vasudev was played at the event.

On May 22nd a Round-Table with experts and policy makers was organized at the Massachusetts Historical Society to have a direct dialogue and steps forward to explore how Yoga and Ayurveda can be used to deal with pain and addiction. This event was co-hosted by Health Commissioner of the State of Massachusetts, Mr. Nam Pham, Assistant Secretary of Commerce and Development and Mrs. Latha Mangipudi, State Representative from NH. Among the key participants were as Dr. Monica Bharel, AYUSH Minister Mr. Naik, Indian Consulate General in New York Ambassador Riva Ganguly Das, Mayor of Nashua NH Mr. Jim Donchess and policy makers from the states of Connecticut, Rhode Island, Massachusetts and New Hampshire. The highlight of this 4-hour-long event was the presence of Sadhduru Jaggi Vasudev.

The grand sponsor of this event was the Ministry of AYUSH, the diamond sponsor was Harvard Pilgrim Health Care, and the gold sponsor was Imed Clinics of the United Kingdom.