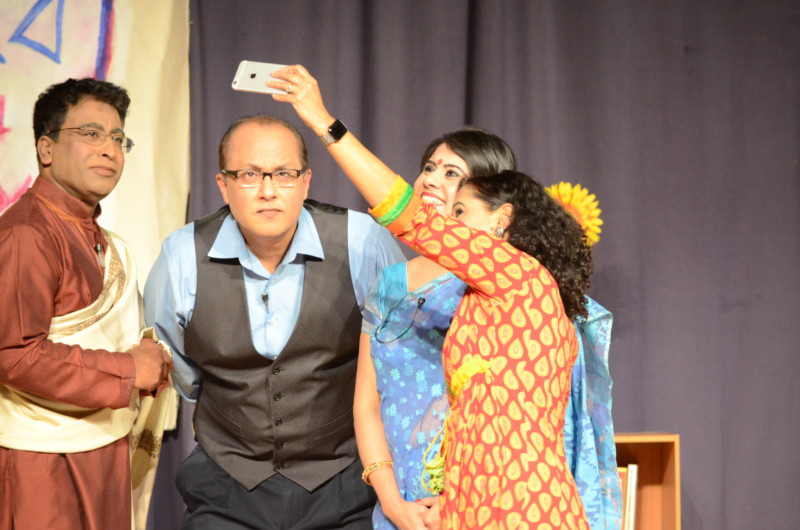 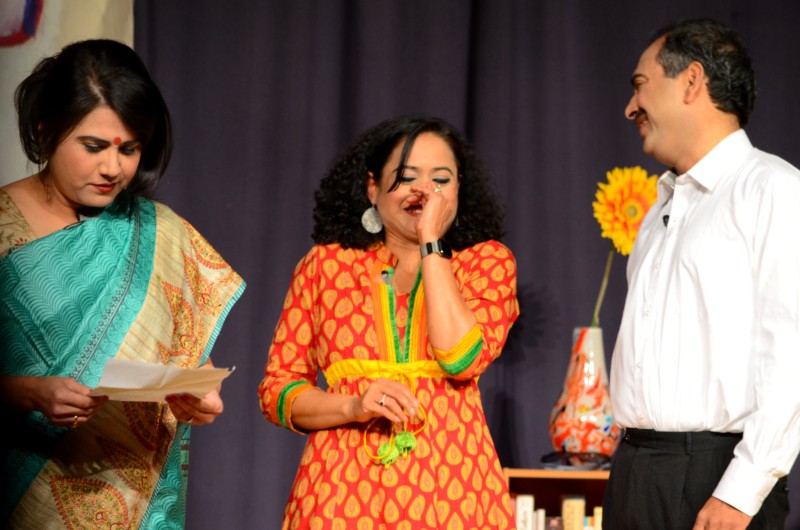 Theater is an integral part of Bengali culture and staging plays during Durga Puja continues to be a long tradition in the community.  This year, the ongoing presidential politics provided the perfect fodder for a contemporary adaptation of renowned Bengali playwright Badal Sarkar. The rapidly evolving real life political drama inspired a band of theater enthusiasts from the community to come together and stage the comedy “Kabikahini” rechristened as “Scandal Scoop Aar Kobitar Hoop”.

The play captured today’s ‘absurd’ political environment  through a husband-wife duo where the husband, a successful businessman, is running for political office and his wife, an editor of a literary magazine is trying to recruit a famous poet for an event to popularize the magazine she edits. Steeped in satire, this situational comedy has competing spouses, aspiring and fake avant-garde poets, a school teacher caught between them and hard-charging politicians.  It is a perfect reflection of the dysfunction and shallowness pervading our society today.

When asked by India New England news, director Sankha Bhowmick reflected: “The dialogues perfectly captured today’s broad social spectrum; the satire produced enough laughs and kept the audience engaged and entertained.  The strength of the play was the well coordinated ensemble of actors, each bringing out the quirks of their character to perfection coupled with the appropriate stagecraft, light and music.”

It was well appreciated by the Bengali community, with rave reviews pouring in even a month after the first staging. Chandreyee Lahiri (GIS Specialist at Commonwealth of Massachusetts) reviewed saying “It was an immensely entertaining satire, especially in these times of media culpability for pandering and half-truths. The cast brought it to life with an impressive deftness given the space and time that separates the play’s inception and execution. It’s not easy to sustain a performance over long monologues which the lead actors delivered flawlessly. The two hours immersed in the lives of the ambitious, flawed and hilarious characters, was a welcome reprieve from reality”. -she added.

“The community loved the play. I personally saw such a well-acted zany, humorous play – after a long time. A consummate performance.” commented Ash Bramha, President of Prabasi club and an avid theatre connoiseur.

Maitreyee Chakravarty, an actress and background music score director at Los Angeles Theatre Festival (Natyo Mela) for more than a decade expressed “You need a scintillating performance from all members to captivate the audience for 2 hours – and this team exceeded that expectation”

Director/Actor/Playwright Dibyendu Paul from Ebong TheatriX, Washington DC said, “The play was set with an election campaign that fitted very well with the current US political climate and the comedy was presented in an elegant manner that differentiated it from slap-stick humour”.

Amitabha Lala, who lead the production, attributed the success to “Great team work with sincere commitment and superb direction with meticulous attention to details”. After an enthusiastic response received from the audience for its two amazing performances, ‘Scandal Scoop Aar Kobitar Hoop’ is all set to do more shows in the future.