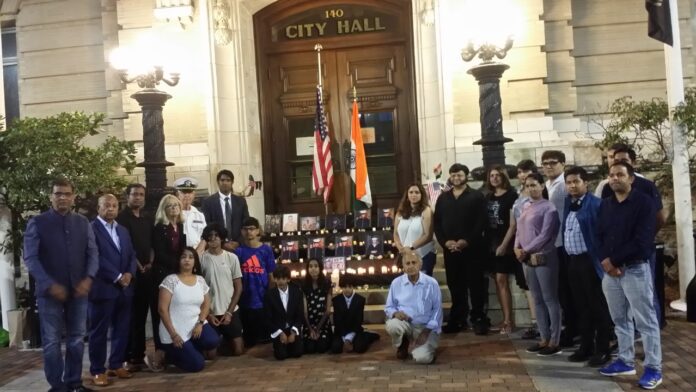 MARLBOROUGH, MA-Members of the Indian American community of Boston recently organized a candlelight vigil for US Service members killed in Kabul terrorist attack on the evening of August 30, 2021.

The vigil was organized at the City Hall of Marlborough, MA. A number of members of Indian American community, including Abhishek Singh, Subbu Kota, Raj Gupta and Brij Sharma, and Robert Lancia who was a member of the Rhode Island House of Representatives, paid tribute to the Americans who died in the attacks in Afghanistan.

Program started with the painful introduction of the event by Mr. Singh.

“These brave soldiers put themselves in danger for the protection of American values and American/Afghan people. Everyone is ‘heartbroken’ about the death of these soldiers,” Mr. Singh said. “They are gone but they will never be forgotten.”

Everyone went to the stage one by one and lit a candle and paid his/her homage for their selfless mission to save the lives of others.

Mr. Lancia, who also served as a chaplain in the U.S. Navy from 1987 to 2004, read the Navy Prayer and explained its source and motivational meaning to the audiences. He recited a formal prayer for the departed souls to have an eternal rest and peace.  He also read some famous quotes that promote the desire or willingness to sacrifice one’s life for the protection of others.

“The lives we lost today were lives given in the service of America. They’re true warriors and sacrificed their lives for the American people,” said Mr. Lancia.

Mr. Kota said that these are awful sacrifices for the families. Their courage and selflessness represent the highest ideals of America. On behalf of the Indian community, “We pay revered tribute to their sacrifice,” Mr. Kota added.

Brij Bhushan Garg stated that these are tough times and lots of unrest is going on in the world. It’s important for everyone to pay homage and pray for peace. He asked all the audiences to join him in chanting the universal Gayatri Mantra that stimulates and facilitates insightfulness and awakening to the Truth within all.